The Reversal and Transformation of Global Christianity, 1900-2000 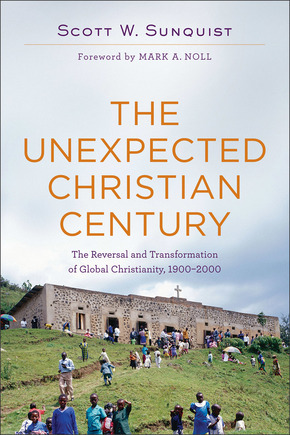 In 1900 many assumed the twentieth century would be a Christian century because Western "Christian empires" ruled most of the world. What happened instead is that Christianity in the West declined dramatically, the empires collapsed, and Christianity's center moved to Africa, Asia, Latin America, and the Pacific. How did this happen so quickly? Respected scholar and teacher Scott Sunquist surveys the most recent century of Christian history, highlighting epochal changes in global Christianity. He also suggests lessons we can learn from this remarkable global Christian reversal. Ideal for an introduction to Christianity or a church history course, this book includes a foreword by Mark Noll.

Contents
List of Figures
Foreword by Mark A. Noll
Introduction: From Jesus to the End of Christendom
1. World Christianity: The Gilded Age through the Great War
2. Christian Lives: Practices and Piety
3. Politics and Persecution: How Global Politics Shaped Christianity
4. Confessional Families: Diverse Confessions, Diverse Fates
5. On the Move: Christianity and Migration
6. One Way among Others: Christianity and the World's Religions
Epilogue: Future Hope and the Presence of the Past
Appendix 1: African Independence and Colonizers
Appendix 2: Asian Independence and Colonizers
Index

"It would be hard to overestimate the valuable contribution Scott Sunquist has made to our understanding of the global Christian movement. This short volume illustrates the point. His knowledge is encyclopedic, his perspective fresh. This volume serves as an excellent introduction to what appeared at the beginning to be the century of Western dominance but ended up being so very different. As Sunquist intimates, we are witnessing the most dramatic century of change since the early Christian period."

"This book provides a learned overview of major themes in twentieth-century world Christianity. Distinguished scholar Scott Sunquist, writing from an insider Christian perspective, shows how such factors as migration, persecution, the decline of Western Christianity, and Pentecostalism have created a religion far different from that of a century ago. He balances depth and breadth in a readable format and, in so doing, provides a valuable addition to the growing body of scholarship on world Christianity."

"This volume places us in Sunquist's debt for extending the Christian story beyond the familiar clichés, luminaries, and events of conventional Western church histories to a trajectory that includes and accounts for the fecund world of Christianity in the global South. Full of surprises, this is an astounding, fast-moving story, whose latest chapter was not and could not have been predicted by earlier generations of church historians."

"The transformation of Christianity into a predominantly non-Western faith is one of the great facts of our time. In this compelling assessment, historian Scott Sunquist analyzes the complex roots and historical significance of this epochal development. The treatment is fully attentive to the interaction between worldwide trends and local peculiarities, and the global perspective brings pressing missiological issues of the day into sharp focus. Written in accessible language but with penetrating insight, The Unexpected Christian Century sheds considerable light on Christianity's prospects in this century by reviewing the last. A valuable addition to a vital discourse."

"This volume could be Sunquist's best offering yet. He remarkably bridges the self-aggrandizing, imperialistic Christian world of a century ago, which he represents as an English-literate, hypereducated, resource-wielding, Caucasian, middle-aged male, and today's unencumbered, multilingual, migrating, dispossessed, suffering, and multitudinous throng of Jesus's Spirit-led followers, in which he enthusiastically participates. Sunquist's insightful interpretations of world Christianity's transformations over the last one hundred years provide empowering gateways through which those who hear this book's message can stride forward with renewed vision, hope, and courage."

"The great merit of Scott Sunquist's book is to narrate the recent history of Christianity as a genuinely and thoroughly world history. It is no longer fresh news that over the course of the last century the Christian faith has expanded into world regions where it was previously unknown, and that it has also receded significantly from areas that it once dominated. . . . Accessible histories that feature the broad general developments of the recent past, and yet that remain connected to particular stories of particular places, remain rare. The Unexpected Christian Century is a notable addition to such efforts. . . . Readers who pay attention to what [Professor Sunquist] has written will . . . find the book a godsend for opening up a vitally important history and pointing the way toward responsible Christian life in the future."

Mark A. Noll (from the foreword)

"The fact that Christianity's center of gravity has shifted decisively to the Global South is no longer surprising of itself. Scott Sunquist has, though, done a splendid job of describing that transformation and exploring its implications. He does so within a remarkably concise space. . . . The general picture of trends that results is overwhelming, and credible. Sunquist always strives to give fair-handed treatment to the various denominations and churches. . . . He aims to give readers and students memorable figures to recall as they try to make sense of the story. That pedagogical strategy is all the more valuable, given the enormous range of cultures and geographic settings covered by the book. Sunquist offers more detailed surveys of some pressing issues in modern Christian history. . . . This extremely useful and often provocative survey can be thoroughly recommended as a textbook for a wide range of academic settings. It also makes excellent reading for the nonspecialist who is curious about just where the Christian faith is going worldwide."

"Sunquist gives an eye-opening look at three great transformations in Christian history. . . . Sunquist treats readers to an engaging, non-biased, history-based overview of Christianity's growth and influence in the world, and highlights the conditions that are needed for Christianity, and Christian communities worldwide, to thrive and flourish."

"Sunquist has done an excellent job by providing different lenses to see the history of Christianity in the twentieth century and how the religion has been transformed by the geographical shifts it has experienced."