The Suffering and Victorious Christ

Toward a More Compassionate Christology 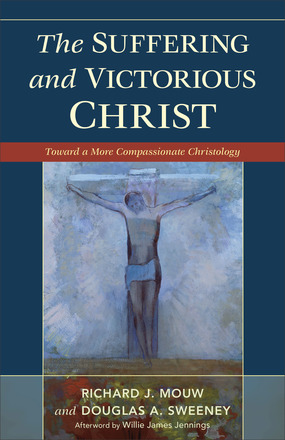 American theologians tend to focus on the great hope Christians have through Christ's resurrection, emphasizing Christ's victory while minimizing or ignoring his suffering. Through their engagements with Japanese Christians and African American Christians on the topic of Christology, Richard Mouw and Douglas Sweeney have come to recognize and underscore that Christ offers hope not only through his resurrection but also through his incarnation. The authors articulate a more compassionate and orthodox Christology that answers the experience of the global church, offering a corrective to what passes for American Christology today. The book includes an afterword by Willie James Jennings of Duke Divinity School.

Contents
Introduction
1. John Williamson Nevin and the Incarnation of God
2. Franz Pieper and the Suffering of God
3. A Brief Interlude on Incarnational Presence
4. Reformed Theology and the Suffering of Christ
5. Christus Dolor among the Slaves and Their Descendants
6. The Challenge of Application: Christus Dolor in the American South
Conclusion
"Christus Victor and Christus Dolor: An Afterword" by Willie James Jennings
Resources for Christological Reflection from Our Japanese and African American Interlocutors
Index

"Richard Mouw and Douglas Sweeney address the 'divine empathy' of the incarnate Christ who, in the mysteries of the Trinity, not only created his fellow humans but also suffers with them. The authors' exploration of neglected themes from Lutheran and Calvinist theologians will satisfy the historically minded, and their engagement with non-European and African American believers will illuminate the universal character of the gospel. Their depiction of Christ's suffering as both absolutely unique to himself and necessary to join him completely to suffering humanity will challenge, humble, and inspire all who stop to consider the 'wond'rous cross on which the Prince of Glory died.'"

"Decades ago, black liberation theologian James Cone invited white theologians to listen closely to the spiritual insights of people of color. The Suffering and Victorious Christ does just that. With sensitivity and skill, Mouw and Sweeney show how much white American Christologies can benefit from Asian and African American histories and theological reflections. As we still strive to create the 'beloved community' Martin Luther King Jr. preached of so powerfully, we need to spend time with more books like this one."

Edward J. Blum, coauthor of The Color of Christ: The Son of God and the Saga of Race in America

"Mouw and Sweeney seek to deliver popular evangelicalism from overly docetic views of Christ that do not take the humanity of Christ seriously enough. Following Barth and listening to African American and Japanese voices, they help us see that the incarnation and sufferings of Christ, properly understood, are not a forfeiting of God's glory but an expression of it. Only when the sufferings and victory of Christ are viewed together is the proper link made between the incarnation and the ascension, the Mount of Transfiguration and the cross, the passion and the resurrection. This work brings these strands together in helpful and generative ways and in the end produces a Christology that fully resonates with the ecumenical councils but also shows how the person of Christ is fundamentally related to the work of Christ. Mouw and Sweeney have helped deepen our Christological moorings with a Christology that reflects in deeper ways God's redemptive work in the global church throughout space and time."

"This is a remarkable testimony of a theological journey in search of resources for a compassionate Christology through American Christianity. The journey starts rather unconventionally with conversations with Japanese theologians who emphasize the image of a suffering Christ in contrast to Western triumphalism. Readers are guided through the thick woods of Protestant orthodoxy, Reformed dogmatics, nineteenth-century German philosophy, Puritan New England, and the American South. Much like the figures they take up in the book, the authors refuse to endorse any one-sided argument for Christus dolor alone or for its multi-cultural adaptations. They point to the danger of over-contextualization and exploitation, both by the privileged and by the oppressed. At the end of the journey, readers will have a solid grasp of what it means to be faithful to the core of our common Christian tradition today while at the same time staying attentive to the voices of contemporary critiques. This book is for all students and professionals who take the challenge of such a theological inquiry seriously."

"This is the best kind of academic book. The writing is clear and engaging, and it speaks both directly and indirectly to issues of importance to Christians outside the academy. The authors model how to engage one's own tradition both faithfully and critically. . . . The 19th-century sources Mouw and Sweeney explore are from an age when 'most theologians still assumed the responsibility of thinking with the church.' The Suffering and Victorious Christ recovers that sense of responsibility. It is a deep and careful reflection on a serious subject. And the questions it seeks to answer are shaped by the experience of the saints in churches both at home and abroad."

"Two white evangelicals think aloud about the strengths and shortcomings of their Reformational traditions and commend the insights of Asian and African-American Christians into the suffering and sorrows of Christ. The afterword by theologian Willie Jennings is both appreciative and critical, and not to be missed."

"Mouw and Sweeney have raised important considerations in this compact book. Theologians in a global context will find critique and encouragement as they seek a nuanced Christology. Perhaps most helpful for pastors and informed lay leaders, the authors deepen and enrich our vision of the suffering Jesus."

"The willingness of Mouw and Sweeney to listen to the observations of theologians outside their cultural context and engage with the theological and cultural history of their traditions is laudable and testifies to their critical acumen and theological humility. . . . The nuance of Mouw and Sweeney's treatment is one of its most praiseworthy features. Their engagement with the Christus dolor in the African American theological tradition--under-represented in academic scholarship, but an important part of American religious history--should also be commended. . . . . Mouw and Sweeney make an important contribution to discussions of Christology, and offer insight into how conceptions of the incarnation condition the ways in which Christians across the world--rich and poor, flourishing and suffering--may identify with God. For anyone interested in Christology or thinking more deeply about the identification of suffering Christians with the Christus dolor, I firmly recommend this volume."