The Story of Creeds and Confessions

Tracing the Development of the Christian Faith 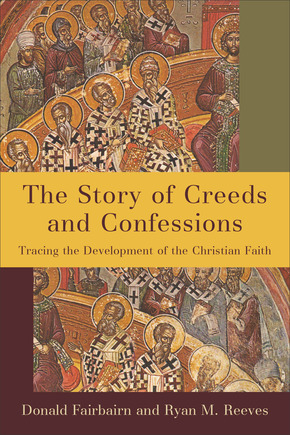 Creeds and confessions throughout Christian history provide a unique vantage point from which to study the Christian faith. To this end, Donald Fairbairn and Ryan Reeves construct a narrative that captures both the central importance of creeds and confessions over the centuries and their unrealized potential to introduce readers to the overall sweep of church history. The book features texts of classic creeds and confessions as well as informational sidebars. Its thorough treatment of the historical and theological contexts surrounding the creeds makes this book essential for courses in historical theology and church history.

"This welcome study combines detailed attention to the foundation of creedal Christianity (especially Nicaea and Chalcedon) with authoritative accounts of later confessional traditions. It is especially effective in showing how early Christian worship of one name, Christ the Lord, led over the centuries and in different local contexts to elaborate accounts of Christian faith. The Story of Creeds and Confessions is a good book for beginning theologians and an excellent review for those who have traversed this ground before."

Mark A. Noll, editor of Confessions and Catechisms of the Reformation

"In this lovely book, Fairbairn and Reeves take an inspired idea--telling the story of the Christian churches and their theological convictions through the history of the creeds and confessions--and execute it brilliantly. The result is an informed, thoughtful, and highly readable tour of the ideas and events that continue to shape the Christian faith today."

"This volume provides a wonderful introduction to the creeds and confessions of the Christian church. It attends carefully to the various historical contexts within which these diverse texts were written and deployed and offers insightful comment on the theological claims that they advance. The result is a work that spurs the reader to greater appreciation and deeper understanding of the tradition of the church and the way in which its official texts have served at different points to express unity, continuity, and disruption. Above all, Fairbairn and Reeves witness to the desirability of taking these documents seriously not only as historical artifacts but also as ongoing witnesses, insisting that what binds Christians together is of much greater significance than what separates them."

"For theology to be ecclesiastically and historically responsible, a knowledge of the creeds and confessions of the church is vital. Yet those unfamiliar with church history often find the field confusing and intimidating. It is therefore a pleasure to recommend this book by Fairbairn and Reeves, which is both a fine guide to creeds and confessions and an engaging narrative of church history from the perspective of doctrinal development. Of special note is the material on the early church, which will help fuel and inform current Protestant interest in the patristic discussions of the doctrines of God and Christ."

"In a remarkable accomplishment not witnessed since Jaroslav Pelikan's Credo more than fifteen years ago, Donald Fairbairn and Ryan Reeves trace in readable fashion the entire history of the church's creeds and confessions. Animating this development, maintain Fairbairn and Reeves, is neither morals nor doctrine per se. Instead, it is the name of the triune God that led Christians through the centuries to articulate their faith in creeds and confessions. Uniting Protestant convictions, ecumenical sensitivity, and scholarly acumen, this book is a solid introduction to the common heritage of the church."

"Many churches and individual Christians who were once guided by but have forgotten about their rich heritage of creeds and confessions are beginning to 'remember.' And many others who were never consciously attentive to this heritage are discovering the knowledge and wisdom to be found in the creeds and confessions. Fairbairn and Reeves have provided all of these seekers with a valuable resource. They clearly and thoughtfully tell the story of the form, substance, and significance of Christian belief as this has been set forth in creeds and confessions. This is an excellent guidebook."

"The story of Christian creeds and confessions is fascinating, and Fairbairn and Reeves are spectacular at exploring the story of Spirit-led, faithful wisdom throughout the centuries. Tracing the development of the Christian faith informs our own engagement with Scripture today."