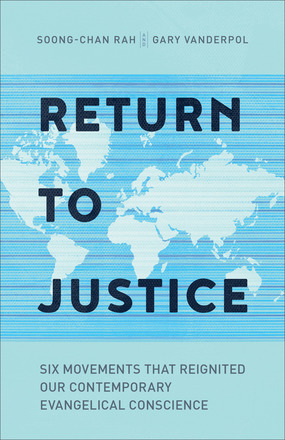 Reclaiming an Evangelical History of Activism

This work explains the important historical context for evangelical reengagement with social justice issues. It tells the story of how, in just two generations, Bible-believing Christians came to rediscover what has always been true: justice is close to the heart of God. The authors provide an overview of post-World War II evangelical social justice and compassion ministries, introducing key figures and seminal organizations that propelled the rediscovery of biblical justice. The book explores the historical and theological lessons learned from evangelical history and offers a way forward for contemporary Christians.

Introduction
Part 1: Justice Is Personal and Relational
1. The Power of Personal Story: John Perkins and the Christian Community Development Association
2. The Power of a Personal Connection: Child Sponsorship and Global Poverty
Part 2: Justice Is Public and Prophetic
3. World Vision and the Work of Prophetic Advocacy
4. Sojourners as a Prophetic Voice for Those on the Margins
Part 3: Justice Confronts Power in Community
5. African-American Evangelicals and the Challenge of True Racial Reconciliation
6. The Fraternidad Teológica Latinoamericana and the Sharing of Power in a Globalized Christianity
Conclusion
Index

"Justice must be central for Christians because it is central to the heart of God. As Soong-Chan Rah and Gary VanderPol write, American evangelicals are rediscovering God's deep concern and Christians' historic activism for justice. Return to Justice is a compelling reminder that those on the margins must be at the center of the church's attention."

Richard Stearns, president, World Vision U.S.; author of The Hole in Our Gospel

"The story of evangelicalism in the United States, and specifically the exciting story of how many in the modern evangelical movement have increasingly embraced justice concerns in the post-World War II era, is inspiring--but also complex and underappreciated. In Return to Justice, Soong-Chan Rah and Gary VanderPol have done a masterful job, telling six compelling stories, with scholarly rigor and highly accessible prose, of evangelicals rediscovering their nineteenth-century justice heritage. Calling the church to return to its true vocation and embrace biblical justice has been the central motivating force of my own life and vocation. So I cannot recommend this book strongly enough. Return to Justice should be read by anyone who wants to understand evangelicals and Christianity on a much deeper level than the shallow political definitions in the media."

"I know Soong-Chan Rah and Gary VanderPol personally and highly respect them and cherish that they have done an excellent job in articulating the history of the return of justice to the evangelical church. I am blessed we can participate in that return as we find ourselves at a wonderful crossroads. I wish that the church community worldwide could read this book, particularly those who are a part of this new multicultural church planting and post-racial generation."

"In the lifetime I have spent within the circle called evangelicalism the single-most noteworthy development is not the much-discussed shift toward activism among the political Right in the Reagan years, but rather the much deeper stream flowing now with dramatic force into social justice activism on the part of many evangelicals. The resurgence of concern for justice emerges from deep wells in the evangelical tradition, and the story needs to be told--and in fact has now been told in Return to Justice. While this story reveals some unexamined assumptions or activisms, the commitment to justice in all its forms--some central and some sadly neglected--is inherent to the deep evangelical tradition. Many who write the history of the twentieth century have ignored these deep wells but they are now visible for all to see."

"Compelled by a deep love for the evangelical church in America, Rah and VanderPol recount the history of some of the movement's most courageous prophets, advocates, and organizations in the church's quest for a more just world. Return to Justice tells the story of an evangelical history that must not be forgotten. This book examines several influential evangelical movements that have shaped our understanding of service, compassion, and justice, including contributions from the African American and Latino evangelical communities. Return to Justice provides valuable insights that both inspire individual growth and compel us toward an authentic return to God's heart for justice."

"This carefully researched book shines a spotlight on modern evangelical movements that expound the gospel message as a mandate for social justice as well as eternal salvation. While the authors' recommendation of these groups includes some critique of their aims and actions, they want other evangelicals to realize how thoroughly evangelical the activities of John Perkins, World Vision, the Fraternidad Teológica Latinoamericana, and other groups have been. Soong-Chan Rah and Gary VanderPol make a persuasive case."

Mark Noll, author of Turning Points: Decisive Moments in the History of Christianity

"While other recent books on current-day prophetic evangelicalism have focused on individuals, Return to Justice surveys the historical institutional foundations of today's prophetic movement. With sharp discernment and clarity, Soong-Chan Rah and Gary VanderPol offer the church an invaluable gift--perspective. They show us the decades-long journey and profound influence of evangelical institutions and communities toward justice in modern times. By looking back these authors offer a kind of ecclesial compass for future generations--wisdom for the road to justice laid out before us all."

"As the social concern among evangelicals grows, it behooves them not only to look at present needs and plan for the future, but also to revisit the stories of pioneers and trailblazers. Return to Justice provides a well-documented historical orientation for an engaged twenty-first-century evangelicalism. In this fascinating narrative we find inspiration, constructive lessons, and pointed challenges for embodying compassion and doing justice. Rah and VanderPol teach us that looking back offers needed perspective for moving forward."

"This is an outstanding primer on the resurgence of evangelical biblical justice activism over the past several decades. Its six historical snapshots of this surge, when viewed together, offer just the right kind of historical background to the present-day interest of Gen-X and Millennial evangelicals, especially, in ministry to the poor, marginalized, and oppressed. I pray that it will inspire even more evangelicals to walk the way of Jesus and spend themselves for those in need."

"Justice has always been an essential part of the proclamation of the gospel. The early followers of Jesus stood out in their communities because they were the ones rescuing discarded female infants from the dung heap. They not only preached the gospel, they were the gospel. Soong-Chan Rah and Gary VanderPol have demonstrated that a lived gospel has also been essential to the evangelical movement. If you care about the gospel of Jesus, then you should drink deeply from Return to Justice. It is the gospel."

"Offers a historical framework for the activism of contemporary Christians."