The Promise of Retrieval for Theology and Biblical Interpretation 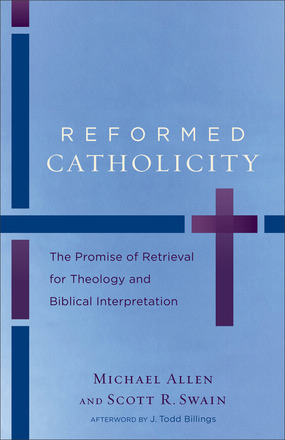 Can Christians and churches be both catholic and Reformed? Can they commit not only to the ultimate authority of apostolic Scripture but also to receiving this Bible within the context of the apostolic church? This volume argues that to be Reformed means to go deeper into true catholicity rather than away from it. Michael Allen and Scott Swain offer a manifesto for a catholic and Reformed approach to dogmatics that seeks theological renewal through retrieval of the rich resources of the historic Christian tradition. The authors provide a survey of recent approaches toward theological retrieval and offer a renewed exploration of the doctrine of sola Scriptura. The book includes a substantive afterword by J. Todd Billings and will appeal to professors and students of theology or Christian doctrine.

Contents
Introduction: Renewal through Retrieval
1. Learning Theology in the School of Christ: The Principles of Theology and the Promise of Retrieval
2. Retrieving Sola Scriptura, Part One: The Catholic Context of Sola Scriptura
3. Retrieving Sola Scriptura, Part Two: Biblical Traditioning
4. A Ruled Reading Reformed: The Role of the Church's Confession in Biblical Interpretation
5. In Defense of Proof Texting
Afterword: Rediscovering the Catholic-Reformed Tradition for Today: A Biblical Christ-Centered Vision for Church Renewal by J. Todd Billings
Index

"Intellectually alert and edifying Christian theology will be attentive to divine instruction in Holy Scripture and to its reception, transmission, and explanation in the writings of the apostolic church in time. This fine book explains why, with clarity, grace, and dedication."

"Allen and Swain here blaze an old trail in helpful new ways, correcting misinterpretations of what it means to be Reformed and in the process indicating a vital way forward for biblical interpretation and theology. I particularly appreciate the way they appeal to properly Protestant principles, like sola Scriptura, even as they urge us to thoughtfully retrieve and appropriate catholic tradition."

"The notion of Scripture alone has come to be used in recent decades as a means of cutting off Protestantism from its own theological and ecclesiological history. The result is a faith that has too often proved fatally vulnerable to critique from Roman Catholics or degenerated into a theologically thin and ahistorical biblicism. In this densely argued but fascinating book, Scott Swain and Michael Allen demonstrate that classic Reformed Protestantism has an understanding of Scripture, of tradition, and of ecclesiology that anchors the Christian faith in biblical exegesis and at the same time provides the framework and the classical categories for avoiding both the Roman and biblicist options. Drawing on recent historical scholarship and engaging with contemporary Christian thought across the confessional spectrum, this is a bracing manifesto that sets out a clear pathway for the future of Protestantism."

"This manifesto embodies the Reformed catholicity for which it calls and for which many of us hope. Allen and Swain engage the catholic variety of today's efforts at theological retrieval by recovering key aspects of the Reformed tradition that biblically support and helpfully shape this pursuit."

"To anyone familiar with recent initiatives in Protestant life and thought, it is no surprise that Allen and Swain would coauthor such a stirring summons to embrace the fullness of historic Christian catholicity. What many will find surprising is that their 'renewal through retrieval' manifesto takes the form of rehabilitating the much-abused doctrine of sola Scriptura, by turns defending it from detractors and rescuing it from misguided champions. In their hands, this venerable doctrine resumes its function as a guide for engaging the riches of the church's historic confession, not as an excuse for ignoring pre-Reformation exegesis. Here is Protestant theology that understands itself, its source, and its context with refreshing clarity."

"Reformed Catholicity is a timely and important book. While slim in size, it is weighty in its message, which not only encourages us to recognize how we are all 'traditioned' in our faith but also invites us to enter this lively stream that flows from the Scriptures through the people of God to us. Thankfully, these wise authors avoid the growing forms of naive primitivism becoming popular in some circles while also steering clear of the sectarian theological isolation proposed by others. Instead, they invite readers to embrace Reformed catholicity, a theologically informed approach that humbly responds to the revelation of the Triune God, recognizing the organic connection between Scripture and dogma, consciously drawing upon and in conversation with the wisdom of the historic church in both her universal and particular expressions."

"A refreshing and encouraging retrieval of the church's rich tradition is occurring among evangelicals in a manner and depth that would have been well-nigh unimaginable thirty years ago. Reformed Catholicity admirably reflects this engagement and will help Reformed readers--and those from other traditions--to embrace ever more deeply the wonder and glory of the blessed Trinity."

"In my humble judgment, Reformed Catholicity . . . deserves book of the year status. Allen and Swain present a vision for Protestant engagement with the Church's past and the saints that populate that past that every evangelical Christian really should read. Particularly insightful are the chapters on sola scriptura ('scripture alone'), which both reinforce the book's argument in toto and illustrate 'retrieval' through some fine engagement with Martin Luther, Martin Bucer, and others. . . . Allen and Swain also argue very compellingly for the need to position our thoughts about biblical authority in relation to other theological truths."

"Reformed Catholicity makes for a fine primer on the insoluble relationship between and proper ordering of Scripture and tradition."

"Swain and Allen continue the recent push for retrieving the tradition as a way of renewing contemporary theology. This book stands out because it's written by two Reformed theologians who are plumbing the depths of their own theological tradition, appealing to principles drawn specifically from Reformed theological prolegomena and ecclesiology to show a Protestant account of how tradition operates in our theology. This is a bold but welcome move to enter in to a conversation inhabited largely by Roman Catholics, who have been laboring in this field for years."

"For anyone desiring to grow in understanding of the rich moorings of Protestant identity--or for anyone who simply wants to read a model of neat, crunchy theological writing--Reformed Catholicity is a helpful resource. . . . Allen and Swain's work is a compelling account of a theological identity that is both Reformed and catholic, both firmly Protestant while also rooted in the entire history of the church. It is an impressive book: thorough in research, broad in reach, penetrating in judgment, cross-disciplinary in implication, and clear and compact in articulation. . . . Reformed Catholicity is a welcome challenge, especially given the tilt against tradition in much of the evangelical world. This book will be useful for initiating newcomers to the task of theological retrieval, answering criticisms of this project, deepening conversations about how it's best done, and shaping and guiding those already sympathetic to the effort."

"Allen and Swain succeed in defending their case--Reformed theology not only warrants a catholic sensibility, in many ways it mandates it. Though this manifesto is slim in size, the argumentation is dense, and the two authors perform their prescribed catholicity well: throughout its pages one encounters a seamless movement between Scriptural exegesis, the Ancient, Medieval, and Reformed traditions (with figures like Augustine, Aquinas, Owen, and Bavinck especially), and an informed interaction with contemporary discussions. . . . This makes for a stimulating read, providing a distinctly Protestant voice in a room where it may be thought that Protestantism can play but a small role."

"I am always looking for a book that could serve well as a textbook. Upon reading this book, I immediately had something of a 'eureka' moment--I have found just the book needed! Here is a book that offers a balanced account of the respective roles played in the discipline of theology by the Scriptures, the confessions, and the study of the history of Scriptural interpretation and theology throughout the history of the church. . . . I heartily recommend this book to any reader who is interested in the question of how theology needs to honor Scriptural authority and at the same time respect the inheritances of the church's reading of Scripture as genuine 'fruits' of the Spirit's presence."

"I am a Baptist who now values the church's shared past as a guide for reading Scripture. Michael Allen and Scott Swain's Reformed Catholicity has contributed to this watershed in my life. My suspicion is that it will do the same for others. . . . Reading Reformed Catholicity should drive us to retrieve our catholic roots, going beyond the reformers to the Apostle's Creed. We can be Reformed and rooted in the teaching of the apostles, thus being 'catholic-Reformed.' Allen and Swain have pushed me further in this direction, helping me to be more comfortable with the church's catholic past. I hope the same for students and pastors."