A Christian Scholar's Journey from America to Africa 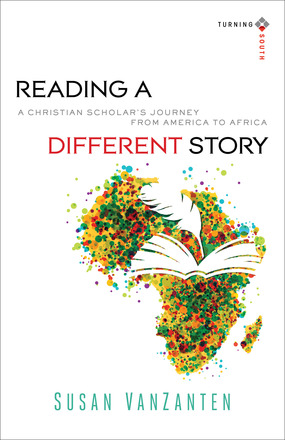 Christianity's demographics, vitality, and influence have tipped markedly toward the global South and East. Addressing this seismic shift, noted Christian literary scholar Susan VanZanten recounts how her focus has shifted from American to African literature, leading her to advocate for a global approach to education and scholarship. Reading a Different Story recounts her journey of reorientation, reflects on the challenges of being a Christian woman scholar, and shows how the rise of global Christianity necessitates changes in academic life.

About the Series
The Turning South: Christian Scholars in an Age of World Christianity series offers reflections by eminent Christian scholars who have turned their attention and commitments toward the global South and East. In order to inspire and move the rising generation of Christian scholars in the Northern Hemisphere to engage the thought world and issues of the global South more vigorously, the series books highlight such reorientations and ask what the implications of "turning South" are for Christian thought and creativity in a variety of cultural fields.

"This engaging intellectual autobiography is a rare treat for anyone pondering what it means to be a Christian scholar and teacher in the twenty-first century. It offers no vague generalizations. Rather, VanZanten has crafted clear-eyed, generous, and wise reflections on her journey into this vocation--from the intertwined blessings and challenges of her Dutch Reformed roots, through the liberating effects and pitfalls of collegiate and graduate study, to experience in an ecumenical range of Christian higher education. The dominant connecting theme is the value of learning to hear the voice of the 'other,' particularly those outside the North Atlantic context."

"In this beautifully written memoir, an exceptionally creative, courageous, and faithful scholar-teacher invites readers to join her on a journey that has led her to a truly global sense of both literature and Christianity. Encountering Susan VanZanten's expanding vision, we are challenged to broaden our own--and also given fresh resources that will help us to face that challenge. Along the way she also shares valuable reflections on gender, literary theory, and teaching. I highly recommend this book to those who teach in church-related colleges and universities."

"Susan VanZanten's wonderful narrative tells how her dedication to teaching led her along unexpected paths: forging her own nuanced synthesis of feminist positions; creating her unique theory of faith and literature; engaging with global and especially African literatures to bring together her love of literature, her political commitments to justice and peace, and her Christian faith. Hers is the fascinating story of an indirect route to wisdom, deepening faith, and integration of mind and heart. It will be enlightening for young scholars being pressured to figure out too much too soon, and inspiring for established scholars who know they are still trying to do so."

"VanZanten offers a rich weave of memoir and theological reflection and makes a compelling argument for curricular globalization that is dialectical, deep, and humble. She shows how a life of scholarship is also an adventure rife with mystery and grace. All who teach or read literature and all who seek to understand what shalom has to do with story will want to read this thoughtful book more than once."

"[VanZanten] recounts the intellectual and spiritual journey that led her to focus on African literature and advocate for an inclusive approach to education. . . . She argues for curricular globalization and the idea of Christian cosmopolitanism, the belief that all human beings share an identity as special creations of God. . . . Many--especially those who work in Christian higher education--will appreciate VanZanten's thorough exploration of what it means to be a Christian scholar-teacher."

"What is compelling about [VanZanten's] story is her discovery of postcolonial African literature, especially South African literature. Reading literature beyond the bounds of our own culture, she contends, is mandatory for Christians. She stakes out a position for 'Christian cosmopolitanism,' based on the premise that 'all human beings share an identity as special creations of God.'. . . Her suggestions of books by African authors will appeal to fiction readers."

"I recommend [this book] highly. . . . [It has] a thread of personal narrative interwoven with the larger story, and for some readers that will be particularly compelling."

"This is a beautiful book. . . . While not a work of literary criticism, this well-written book nonetheless provides the reader with glimpses of a scholar's love of literature as it turned from American novelists Faulkner and Melville to African writers Gordimer, Coetzee, Achebe, and others. Readers unfamiliar with these works--American or African--are given just enough of a taste of VanZanten's appreciation for them to want to investigate them further. Theological seminaries, Christian colleges, and other educational institutions in the Global North still struggle to reconfigure their curricula to take into account the southward shift of world Christianity. VanZanten's intellectual autobiography provides a set of signposts for such reconfiguring. . . . Graduate students and younger faculty members at North American Christian colleges will find VanZanten's book especially helpful as a way of reflecting upon their own growth as scholars and teachers."

"VanZanten is an apologist for 'Christian cosmopolitanism.' She wants believers' allegiances to transcend geopolitical borders. Specifically, she wants us to read widely and well in order to better love God and to love our neighbors, both near and far. While she specifically appeals to her colleagues in academia, the principle applies to the rest of us just as well. . . . VanZanten's account in Reading a Different Story is intensely personal; the specific contours of her life will vary drastically from yours and mine. . . . But for those of us who read regularly . . . Susan VanZanten's invitation to turn south in our literary interests is one we'd do well to heed."

"It was with great pleasure that I read [this] memoir. . . . [VanZanten's] short (130 pages) and engagingly-written book would reward a person who might know that the world of religion and academics is changing rapidly, but who might feel a bit disoriented in locating oneself in a global culture that is being newly constructed on what Thomas Friedman has called 'a flat earth.' What Susan VanZanten leads us through, with scholarly precision and care for documentation, is this: we are encouraged to enlarge our places of origin--both spatially and psychically--and to make the acquaintance of new neighbors in our nearby-yet-global world. . . . She engages and enlarges our Christian worldviews to realize what we've known all our lives, but now know more deeply: that all humans are image bearers of God and are our brothers and sisters. . . . [A] delightful book."

"A wonderful, slim book by literature professor Susan VanZanten who [writes] wonderfully about her coming to appreciate the stories of the developing world."

"Honors to Baker Academic for this surprisingly thrilling, very informative series called 'Turning South: Christian Scholars in an Age of World Christianity.' . . . Reading a Different Story was particularly delightful for me. . . . This book is splendid, and a fun read for anyone interested in global travel or world missions. It is very important for those who teach, especially for college professors wanting to be current in efforts to be properly multicultural. Its great strength, though, is how it brings to us insights about African literature and other important writings from the postcolonial years in the global South."