An Introduction to Epistolary Analysis 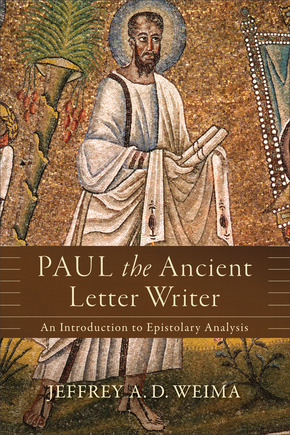 This clear and user-friendly introduction to the interpretive method called "epistolary analysis" shows how focusing on the form and function of Paul's letters yields valuable insights into the apostle's purpose and meaning. The author helps readers interpret Paul's letters properly by paying close attention to the apostle's use of ancient letter-writing conventions. Paul is an extremely skilled letter writer who deliberately adapts or expands traditional epistolary forms so that his persuasive purposes are enhanced. This is an ideal supplemental textbook for courses on Paul or the New Testament. It contains numerous analyses of key Pauline texts, including a final chapter analyzing the apostle's Letter to Philemon as a "test case" to demonstrate the benefits of this interpretive approach.

Contents
1. Introduction
2. The Opening
3. The Thanksgiving
4. The Body
5. The Closing
6. Epistolary Analysis in Practice: The Test Case of Philemon
Indexes

"Weima's masterful study sets before readers the benefits of paying close attention to the structure of Paul's letters. The chapters investigate standard features as well as changes in the regular patterns in the opening, thanksgiving, body, and closing sections of Paul's epistles. Weima writes with great clarity and deep insight, laying out the ways in which close attention to these epistolary features can enrich and enlarge our understanding of these letters. This work will benefit scholars, students, and general readers alike with the clear presentation of ideas and the helpful application of those concepts to real examples from Paul's letters--an outstanding book from a seasoned and much-respected scholar."

Paul Foster, professor of New Testament and early Christianity, Head of the School of Divinity, University of Edinburgh

"This comprehensive study of the method and literary analysis of the epistles is a valuable resource for both the beginning student of exegesis and the experienced practitioner. Weima brings together both the history of research and decades of his own work, moving beyond the identification of ancient literary conventions to demonstrate the ways in which Paul has shaped them for his own purposes. The book is unparalleled among current books on epistolography."

"Weima's work on Paul as the writer of letters is an essential resource for anyone who studies the Pauline Epistles. The author is clearly a master teacher because the book is marked by an unusual clarity and organization. Weima clearly explains various literary conventions that are used, but best of all he gives ample examples to illustrate the different conventions. I learned much from this book and recommend it gladly to students, pastors, and scholars."

"Paul the Ancient Letter Writer is an overdue book that needed to be written. Readers of this comprehensive study will no longer be able to escape the reality of Paul having written real letters. Weima shows how the essential components of ancient letters appear in each of the thirteen texts in the New Testament's collection of Paul's letters."

"Weima has written a very timely and important book on how to analyze the apostle Paul's letters. A growing number of scholars, myself included, have had serious questions about the over-rhetorization of Paul's letters. Weima presents a useful and helpful alternative in returning to a robust form of epistolary analysis. We may have some differences of opinion on whether there are four or five major parts to the Pauline letter, but we are in agreement that analysis of the epistolary form of Paul's letters is central to their interpretation. I strongly endorse the approach of this book and Weima's attempt to exemplify it, and I think that other interpreters of Paul's letters will benefit as well."

"Paul the Ancient Letter Writer offers an eminently readable introduction to the method and value of epistolary analysis. As Weima guides readers through the four major sections of Paul's letters--the opening, thanksgiving, body, and closing--he shows with clarity and care how Paul both reflects and creatively adapts ancient epistolary conventions. The detailed epistolary analysis of Paul's Letter to Philemon at the end of the book offers a helpful test case that illustrates the interpretive value of this approach. I highly commend this excellent resource to all interested in the letters of Paul and of other early Christians."

"[Weima] builds his carefully crafted study using extensive examples that are concisely communicated but sufficiently detailed. This is a superb study, very readable, with engaging exegetical insights. It deserves to be read by scholars and students alike. Highly recommended!"

Journal for the Study of the New Testament

"Paul the Ancient Letter Writer fulfills the promise of its subtitle by providing an introduction to epistolary analysis. It is well written and researched. It interacts well with and is up to date on current scholarship. Weima's analysis is careful and detailed, and his use of examples keeps the pace of the discussion moving nicely. The primary values of the volume are its comprehensive scope and its emphasis on interpretive significance. Although other scholars have looked at epistolary sections and conventions from a variety of perspectives, this book seeks to deal with their form and function in all of the letters attributed to Paul. It also goes beyond form and function to consider the significance of those conventions. The latter feature challenges the serious interpreter of Paul's letters to use epistolary analysis as a starting point for identifying potential areas for in-depth interpretive exploration."

"This is a most helpful resource for introducing biblical students to the Pauline letters. . . . [A] clearly written and valuable resource."

"A masterful book on Pauline letter writing. . . . Paul the Ancient Letter Writer is a magnificent book that (almost) instantly allows readers to see the value and importance of reading a biblical letter as a letter, more specifically an ancient letter of the Greco-Roman period. This is a basic hermeneutical rule that often gets overlooked by the average reader and [is] vitally import for every pastor and teacher seeking to communicate the Bible accurately and effectively. . . . For those who find joy in the discovery of interpretive treasures of Scripture, [this book] is both a clear and captivating example that there is a 'right' and 'wrong' way to go about reading Paul's letters and the insights from this volume pay dividends immediately. This would be an excellent companion textbook in a New Testament course, especially where the genre of epistle encompasses a majority of the coursework. It would also do well in an intermediate or advanced hermeneutics course. While the book is rather detail oriented at times, I still found it to be easily accessible and refreshingly saturated with helpful charts and images of Weima's analysis of Paul's letters. . . . Highly recommended."