An Introduction to Aquinas’s Moral, Economic, and Political Thought 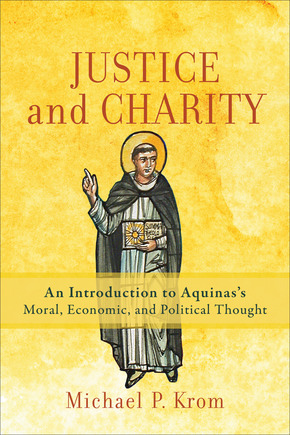 Christians are called to be in the world but not of it, yet the divisions between them often show how much they interpret the faith through the lens of their political affiliations or cultural assumptions. Michael Krom argues that those who want to heed the church's call to engage our culture need to look to the past. In particular, they should familiarize themselves with the writings of St. Thomas Aquinas.

This book introduces readers to Aquinas's moral, economic, and political theory, both because he is a superb teacher and because his system of thought provides an interpretive key to the church's engagement with contemporary society. Krom differentiates between philosophy (justice) and theology (charity) within each of the three branches of Aquinas's theory of human living. He shows how Aquinas's thought offers an integrated vision for Christian participation in the world, equipping readers to apply their faith to the complex moral, economic, and political problems of contemporary society.

Written in an accessible style by an experienced educator, the book is well suited for use in a variety of undergraduate courses and provides a foundation for understanding Catholic social teaching.

"In Justice and Charity, Michael P. Krom has written an introduction to Thomas Aquinas's moral, economic, and political thought that is dazzling in its clarity and succinctness of exposition. In it we witness a master teacher at work, always eager to render all intellectual content intelligible to the beginner. I recommended this book for both teacher and student alike."

"In Justice and Charity, Michael Krom offers a thorough and careful exposition of the Thomistic framework that underpins Catholic social teaching. Anyone seeking to better understand the Catholic faith or its philosophical and theological foundations will profit greatly from reading this book."

"In today's increasingly secular society, with both liberal and conservative politicians claiming to know what Christianity requires of us in public life, it is essential that Christians, and Catholics in particular, have a North Star by which to navigate, to make good decisions in the moral, economic, and political realms. Aquinas is that North Star. Krom's presentation moves from the moral to the economic and the political in a way that shows the grounding of economic and political choices in the most basic principles of morality which, in turn, are grounded in Aquinas's Christian understanding of human nature. He supplies background reading in each chapter so that the reader can go back to the precise place in Aquinas's text where the topic is discussed. This is an excellent book for use in a college course on Aquinas's moral and political thought or on Catholic social teaching. The final chapter on Aquinas's theory today gives concrete practice in applying his thinking to contemporary problems."

"A rich and readable Thomistic introduction to Catholic social teaching. From alternating philosophical and theological angles, Krom lays out the central components of truly good moral, economic, and political life. In an instructive final chapter, Krom deftly brings St. Thomas's principles to bear upon the complexities of the contemporary world. Highly recommended!"

"Overcoming the usual divisions that characterize the different schools of Thomism, Michael Krom approaches the writings of St. Thomas Aquinas with fresh and lively eyes in order to answer some of the pressing questions with which we are currently faced. Justice and Charity is an excellent example of how to address contemporary social and political issues with the help of ancient wisdom. I recommend it to beginning and experienced scholars alike."

"Our understanding of economics and politics must be informed by a love of wisdom and a knowledge of God; if it isn't, we end up with tyranny and its deadly consequences. Since this is so, Michael P. Krom's new book is a true gift for all those seeking a world governed by justice and charity."

Joseph Pearce, author of Small Is Still Beautiful: Economics as if Families Mattered

"Expertly and informatively written, organized, and presented, Justice and Charity: An Introduction to Aquinas's Moral, Economic, and Political Thought will prove to be a valued and appreciated contribution to the growing library of scholarly studies about the thought, philosophy, and theology of Thomas Aquinas. . . . Extraordinary and unreservedly recommended for Church, seminary, community, college, and university library Christian Theology collections in general, and Thomas Aquinas supplemental studies in particular."