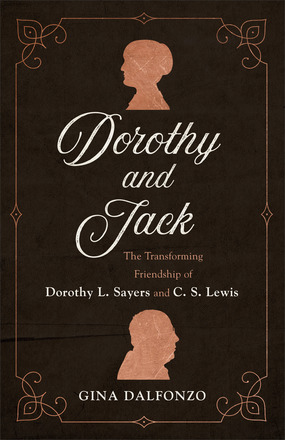 "An engaging, creative, and thorough portrayal of a remarkable friendship."--Colin Duriez, author of C. S. Lewis: A Biography of Friendships and Dorothy L. Sayers: A Biography: Death, Dante and Lord Peter Wimsey


What happens when we push past the surface and allow real, grounded, mutually challenging, and edifying friendships to develop? We need only look at the little-known friendship between eminent Christian thinkers Dorothy L. Sayers and C. S. Lewis to find out.

Born out of a fan letter that celebrated mystery novelist Sayers wrote to Lewis as his star was just beginning to rise, this friendship between a married woman and a longtime bachelor developed over years of correspondence as the two discovered their mutual admiration of each other's writing, thinking, and faith.

Gina Dalfonzo's absorbing treatment of the relationship between two of Christianity's most important modern thinkers and writers will resonate deeply with those who long for authentic, soul-stirring friendships that challenge them to grow intellectually and spiritually.


"Beautifully written, Dorothy and Jack will transform not only common understanding of both Lewis and Sayers but also common assumptions about male/female friendships."--Crystal Downing, codirector of the Marion E. Wade Center, Wheaton College; author of Subversive: Christ, Culture, and the Shocking Dorothy L. Sayers and Writing Performances: The Stages of Dorothy L. Sayers


Gina Dalfonzo is the author of One by One, a columnist at Christ & Pop Culture, and the founder and editor of Dickensblog. Her writing has been published in The Atlantic, Christianity Today, First Things, The Weekly Standard, Guideposts, OnFaith, and Sehnsucht: The C. S. Lewis Journal, among others. She earned her BA in English from Messiah College and her MA, also in English, from George Mason University. The recipient of a Clyde S. Kilby Research Grant for 2018, Dalfonzo lives in Virginia.

"Gina Dalfonzo deftly interweaves discussion about two brilliant Christians, demonstrating their many similarities and differences. Employing quotations from both published and unpublished letters, Dalfonzo argues that Lewis responded to Sayers like no other friend in his adult life, preparing him for his relationship with Joy Davidman. Beautifully written, Dorothy and Jack will transform not only common understanding of both Lewis and Sayers but also common assumptions about male/female friendships."

"This book is both delightful and important. The style is so engaging that it is easy to overlook how rich it is in content. Not only do we learn a great deal about Lewis and Sayers but we are also treated to a nuanced account of the nature of friendship itself. I enjoyed every page of it, and I heartily recommend it. It is very, very good."

Diana Pavlac Glyer, professor at The Honors College, Azusa Pacific University; author of The Company They Keep and Bandersnatch: C. S. Lewis, J. R. R. Tolkien, and the Creative Collaboration of the Inklings

"An engaging, creative, and thorough portrayal of a remarkable friendship between two people who have had a wide-ranging impact upon their readers and audiences. This authentic dual biography of friendship is full of equally deep insights into both Sayers and Lewis. As we read, their friendship opens our eyes to much more of these two, who continue to have a transformative effect long after their deaths. The affinities revealed in this book between these very different people, which have too often been neglected, explain some of the dynamics of their gifts of stories, wisdom for our age, accessible theology, and clear thinking that changed each of their lives."

"I've read and enjoyed virtually everything by these two wonderful writers, but until now I'd never really fully understood the impact they had on each other. Gina's thoroughly researched and thoroughly entertaining book is filled with fresh insights about two of the greatest writers and most creative apologists of our time. If you are a fan of either writer, this is a book you'll want to read. It is simply a delight."

Terry Glaspey, author of 75 Masterpieces Every Christian Should Know, Not a Tame Lion: The Spiritual Legacy of C. S. Lewis, and The Prayers of Jane Austen

"Dorothy and Jack is an enchanting gift, handcrafted with research, love, and intelligence. This book isn't just about friendship; it is a testimony to the absolute transforming power of friendship. This book is about C. S. Lewis and Dorothy L. Sayers, but it is also about all of us; it is about the unexpected beauty in relationship. Lewis once referred to Sayers's zest as a 'high wind.' This book is also a high wind to remind us that, as Dalfonzo states, 'In friendships of intelligence and character, gender can be transcended.' Dalfonzo and I both agree--Dorothy in many ways prepared Jack for the woman who would become his wife, Joy Davidman. Dalfonzo's captivating narrative and profound understanding deepens and ultimately reveals the 'wild truth' of Dorothy and Jack--how they changed each other's lives, hearts, and work, and therefore how they have changed ours."

"Sadly, many readers of C. S. Lewis know little of Dorothy L. Sayers's works, and all too often the reverse is true as well. However, in Dorothy and Jack, Gina Dalfonzo has happily remedied this deficit by demonstrating the strong connections between these two Christian thinkers. Both were intelligent, thoughtful, creative scholars who shared a strong sense of dedication to their writing as well as a playful sense of fun. Likewise, as devout Anglicans and lay apologists for the Christian faith, they each grappled with the demands of serving in this difficult public role. Dorothy and Jack not only engagingly unfolds the deepening friendship between these two but also sheds welcome light on the significant value this friendship added to their lives. All those who love the writings of Sayers and Lewis will relish the insights and delight to be found in the pages of Dorothy and Jack."

"Dorothy Sayers is a required text for understanding and appreciating the works of both prodigious writers. Lewis and Sayers hailed from two very different worlds, however, Dalfonzo deftly illustrates how the two nurtured a lasting connection which thrived on humor, mutual respect, constructive criticism, and shared spiritual values. This book is a true gem."

"A well-researched and lively narrative like this one of the relationship between Dorothy L. Sayers and C. S. Lewis needed to be written. Dalfonzo has delved deeply into the history of both of these significant literary figures who also made their mark as apologists for the Christian faith, the works and influence of both extending to the present day. Her storytelling talent provides a vivid, attractive text that keeps the reader wanting to know more, and her analysis of the relationship is bracing and thought-provoking. One cannot ask for a better treatment of these Christian icons."

"Much has been made of Lewis and his band of brothers. But the company of Tolkien, Barfield, Williams, and Dyson, while invaluable, offer something of a one-lensed view. I think we can still benefit from a clearer vision. Dalfonzo's work on Dorothy Sayers gives us a broader view than what the male monocle can offer. There's something in Lewis best seen through his relationship with Sayers--something formative, instructive, and encouraging--something transformational."

Corey Latta, author of C. S. Lewis and the Art of Writing

"As someone very familiar with Jack's life, I was surprised and pleased to learn more about the similarities between him and Sayers and how their differences impacted each other over the decade and a half they knew each other. Dalfonzo's work sheds much-needed light on this important friendship."

"To pair Dorothy Sayers and Jack Lewis into one lucid, well-researched book is a tremendous contribution. Dorothy and Jack is an enjoyable read, especially for those who want a rigorous, unsentimental expression of orthodox Christianity within post-Christian culture."