Divine Will and Human Choice 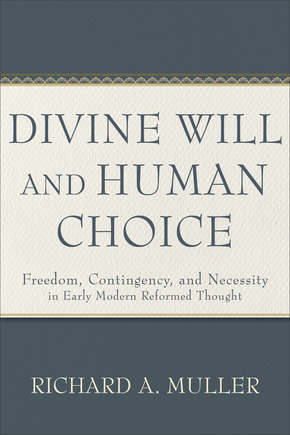 The relationship between divine providence and human freedom remains one of the most vexing topics in Christian theology. Many gravitate to extreme ends of the spectrum, with a version of hyper-Calvinism on one end or perhaps some form of open theism on the other. Christian theology seems ever in search of a way to articulate a balanced picture of a sovereign God in relationship to humans who can make choices.

This fresh study from an internationally respected scholar of the Reformation and post-Reformation eras shows how the Reformers and their successors analyzed and reconciled the concepts of divine sovereignty and human freedom. Richard Muller argues that traditional Reformed theology supported a robust theory of an omnipotent divine will and human free choice and drew on a tradition of Western theological and philosophical discussion that included such predecessor thinkers as Thomas Aquinas and Duns Scotus. In arguing this case, the book provides historical perspective on a topic of current interest and debate--the issue of freedom and determinism--and offers a corrective based on a broader analysis of the sources.

"Few scholars possess Richard Muller's knowledge of early modern theology or his ability to analyze with precision Reformed teaching on the central question of divine and human causality. The breadth and depth of Muller's command of Reformed thought displayed in this book are unrivaled, ensuring that Divine Will and Human Choice will quickly establish itself as a must-read for all students of Protestant theology."

"There is not a more contested area in the study of Reformed orthodoxy than issues of divine foreknowledge, human free will, and the nature of contingency. The matter is highly complicated and involves multiple questions of interpretation and reception, including how Aristotle was appropriated by medieval schoolmen, such as Aquinas and Scotus, and how the medievals were then used by the Reformed. Those new to the field can easily become overwhelmed by the sheer volume of primary literature and the confusing subtlety of the arguments. In this context, Divine Will and Human Choice by Richard Muller is a welcome addition to the literature because it offers both the neophyte and the scholar a superb account of the various questions involved and provides judicious critiques of the contemporary debate."

"Once again Richard Muller has provided us with an extremely careful and insightful analysis on the development of Reformed theology. He has approached the topics of freedom and necessity in Reformed thought from his extremely knowledgeable background of ancient philosophy and medieval theology. In so doing he has provided a trajectory that demonstrates that Reformed thought cannot be understood in isolation from the Western tradition as a whole. This is a superb study, and there is much to learn from this volume."

"Divine Will and Human Choice exhibits all the characteristics we have come to expect from Richard Muller. Through his compelling historical argumentation and mastery of ancient, patristic, medieval, and early modern sources, Muller demonstrates that the contemporary categories of compatibilism and libertarianism fail to capture the rich and variegated approaches of early modern Reformed theologians to questions of divine and human freedom, necessity, and contingency. The result is a new perspective on Reformed orthodox teaching about God and providence with new possibilities for constructive theology."

"Muller continues to surprise readers with fascinating news from historical sources, and this rich volume is the latest fruit of his ongoing research. His careful analysis in Divine Will and Human Choice shows that this theme remains highly relevant for church and society today. Here Muller reevaluates positions, challenges readers, and serves theology with another fine work."

"At long last we have a comprehensive historical study of the Reformed understanding of divine will and human free choice in its pre-Edwardsian formulation. Muller's analysis first introduces readers to the current state of the question, focusing particularly on synchronic contingency and its variant understandings. With a close reading of primary sources--reaching back to the various receptions of Aristotelian ideas among the medievals and centering on Aquinas and Duns Scotus--Muller unpacks how early Reformed thinkers and their heirs, the Reformed orthodox, treated matters surrounding necessity, contingency, and freedom relative to the divine will. Engaging the most prominent Reformed writers, including Calvin, Zanchius, Junius, Gomarus, Twisse, Owen, Voetius, and Turretin among others, this study demonstrates how these matters have been forgotten or misapprehended in modern discussions. Muller's work amply succeeds in showing how the Reformed orthodox knit a theological garment that does not well fit the modern categories and nomenclature of incompatibilism (or libertarianism) and compatibilism, that is, an indeterminism versus a raw determinism. In doing so, this volume is destined to propel the theological discussion surrounding necessity, contingency, and human freedom for decades to come."

"This book provides a major reassessment of ancient and medieval antecedents of the Reformed understanding of contingency. Devoting specific attention to Aristotle, Thomas Aquinas, and John Duns Scotus, Muller highlights the eclecticism of Reformed orthodoxy. In particular, he develops a multilayered argument showing that Duns Scotus was both less of an innovator in his own day and less of a formative influence for later Reformed orthodoxy than has sometimes been suggested. This nuanced historical analysis of the early modern Reformed understanding of contingency under God is thought-provoking."

"Written by a great historical theologian and seminal thinker, this book is crucial for understanding a central debate in Christianity: God's sovereignty and human free will. There is no one as gifted at navigating these deep waters as Richard Muller. All theologians, pastors, and students of theology who desire a deeper understanding of how early Reformed divines affirmed absolute divine sovereignty without teaching fatalistic determinism should read this book."

"How can sovereignty of divine will be compatible with freedom of human choice? Throughout church history, theologians and philosophers have wrestled with this question by adopting various philosophical tools to explain the precise nature of necessity, possibility, and contingency. In this study, Richard Muller provides a comprehensive reassessment of medieval background of the early modern Reformed thought on those philosophical concepts. . . . Muller provides his penetrating analysis of the multi-layered issues involved. In addition to his meticulous scholarship on the early modern period, for which he is well known, here Muller displays that he also has a surprisingly thorough familiarity with a wide variety of both primary and secondary sources from the ancient and medieval periods. . . . Recommended for those who are seeking to be informed about how the Reformed orthodox theologians wrestled with the age-old issue of divine will and human freedom and about the nature of their medieval scholastic background."

"Muller is (rightly) one of the dominant names in the field of Reformation and Post-Reformation scholarship. His studies on Calvin as well as the broader Reformed tradition--especially his magisterial, 4-volume, Post-Reformation Reformed Dogmatics (PRRD)--have irrevocably changed the contemporary conversations surrounding these figures. One of the aims of his studies is to resituate figures like Calvin and the later generations of Reformed Scholastic theologians in their contemporary and historical context, in order to correct anachronistic judgments surrounding their thought. . . . That same aim animates his most recent offering. . . . Muller's command of the primary and secondary literature for the classical, Medieval, and modern periods is on full display. . . . If you're curious about the issue of the divine will and human freedom and you want to take a deep, historical dive, this is a book for you. If you're interested specifically in the discussion surrounding these issues in the Early Modern period, well, you're probably an academic or a nerd, so this is a no-brainer. When Muller writes, you buy Muller. This work is no different."

"Muller has gained a (deserved) reputation as one of the leading scholars of historic Reformed orthodox theology. He has, in large part, led the way in exploding historical myths. . . . Divine Will and Human Choice tackles the difficult age-old question of the relationship between God's sovereignty and human freedom. . . . In treating issues related to divine will and human freedom in Reformed orthodoxy, he simultaneously builds upon and contradicts most respected scholars in the field. . . . The topic treated in this book can be perplexing and if anyone is qualified to refine and even correct the arguments of other scholars in this area it is Muller. . . . Muller has read and knows more than all but a very small number of people will ever know. In spite of the work being challenging to process, it remains a wealth of information. . . . For those who want (or need) to understand the medieval and Reformed terminological and philosophical underpinnings of the issue treated in this present volume, Divine Will and Human Choice will likely set the standard for years to come."