Calvin and the Reformed Tradition

On the Work of Christ and the Order of Salvation 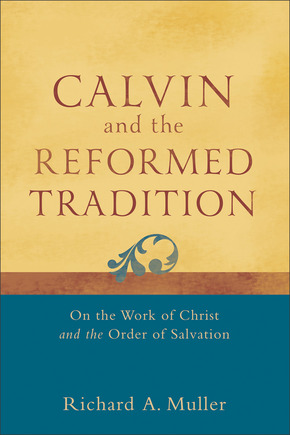 Richard Muller, a world-class scholar of the Reformation era, examines the relationship of Calvin's theology to the Reformed tradition, indicating Calvin's place in the tradition as one of several significant second-generation formulators. Muller argues that the Reformed tradition is a diverse and variegated movement not suitably described either as founded solely on the thought of John Calvin or as a reaction to or deviation from Calvin, thereby setting aside the old "Calvin and the Calvinists" approach in favor of a more integral and representative perspective. Muller offers historical corrective and nuance on topics of current interest in Reformed theology, such as limited atonement/universalism, union with Christ, and the order of salvation.

Contents
1. From Reformation to Orthodoxy: The Reformed Tradition in the Early Modern Era
2. Was Calvin a Calvinist?
3. Calvin on Christ's Satisfaction and Its Efficacy: The Issue of "Limited Atonement"
4. A Tale of Two Wills? Calvin, Amyraut, and Du Moulin on Ezekiel 18:23
5. Davenant and Du Moulin: Variant Approaches to Hypothetical Universalism
6. The "Golden Chain" and the Causality of Salvation: Beginnings of the Reformed Ordo Salutis
7. Union with Christ and the Ordo Salutis: Reflections on Developments in Early Modern Reformed Thought
8. Calvin, Beza, and the Later Reformed on Assurance of Salvation and the "Practical Syllogism"
9. Conclusions
Index

"Meticulous attention to texts and their contexts, expressed in Muller's own lively, precise language and expressing his astute assessment of the theologians he studies, marks this collection of new and old from the leading living scholar of the practice of Reformed theology in the sixteenth and seventeenth centuries. Muller takes readers into the intellectual world and the thinking of Calvin and a number of others, representatives of Calvin's own time and of the following generation. Muller plumbs the depths of their teaching in their historical settings with judiciousness and acumen while clarifying the intricate relationships among Reformed thinkers. He places his own monumental work into the framework of current scholarly discussion and of the sources which have produced his insights in ways that will bring readers at every level of familiarity with Reformed theology much deeper into its riches."

"Calvin and the Reformed Tradition is a masterful and penetrating look into critical dimensions of Calvin's soteriology in relation to the Reformed tradition. Richard Muller presents here the fruit of decades of careful research into sixteenth- and seventeenth-century sources. Sometimes he gives us a satellite view of conflicting master narratives in retelling Reformation and post-Reformation theology. At other times he gives us a microscopic view of specific texts in Calvin's works, carefully analyzed in their context. At every turn he calls scholars to careful definition of terms and the avoidance of imposing anachronisms on early modern writers. Students of historical theology with an interest in matters such as the divine intent of Christ's death, the free offer of the gospel, the will of God for salvation, union with Christ, and the relation of assurance of salvation to the fruit of the Spirit will find this book challenging, illuminating, and helpful."

"This forcefully written and persuasively argued book casts in relief the diversity and complexity of the Reformed tradition in the early modern period. With an astonishing grasp of a broad range of sources, Muller offers a challenging and illuminating examination of the tightly woven relations between theology and history. The analysis is penetrating and the arguments break new ground, all in conversation with generations of scholarship on Reformed thought. Essential reading."

"Once again, Richard Muller has provided us with a sophisticated and provocative analysis of the Reformed tradition. In this detailed and careful study of Reformed Orthodoxy, Muller debunks the 'master narratives' of both 'Calvin for the Calvinists' and 'Calvin against the Calvinists.' Rejecting simplistic grand narratives, Muller goes directly to the texts. In so doing he analyzes in detail the different contexts, language, augmentation, exegesis, and changing debates of the authors. He demonstrates that the development of the Reformed tradition was determined by many sources besides that of John Calvin. In his analyses he brings to life the complexity and variety of the sources, arguments, and doctrines of these various authors. By allowing them to speak on their own terms and in the context of the debates of their times, he demonstrates that the development of Reformed Orthodoxy was far from monolithic. Muller teaches us that this tradition stemmed from multiple backgrounds, relied on various predecessors and sources, and must be understood in terms of changing circumstances. This book is indispensable for understanding the development of the theology of the Reformed tradition."

"Richard Muller's newest collection of essays offers readers a clear introduction to several long-standing disputes over the identity and theology of the so-called Calvinist tradition as well as a relatively short entryway into Muller's own extensive scholarship. Written with his usual candor and suffused with a mastery of the original sources, these essays are a welcome defense of the integrity and independence of the Reformed tradition's sixteenth- and seventeenth-century exponents against those who would distort the historical record or reduce them to a series of footnotes to a Calvin who never existed. Sensitive to historical context and literary genre as well as to the influence of theological traditions and biblical exegesis, these essays are a clinic in responsible historical-theological method."

John L. Thompson, professor of historical theology and Gaylen & Susan Byker Professor of Reformed Theology, Fuller Theological Seminary; author of Reading the Bible with the Dead: What You Can Learn from the History of Exegesis That You Can'

"Richard Muller has been the key player in the extensive revision of how the theology of Calvin and his contemporaries is understood to relate to that of the later Reformed tradition. In this collection, he provides the reader with an outstanding selection of essays on this topic. Wide-ranging in scope, penetrating in argument, and breathtaking in scholarship, these essays are representative of Richard Muller at his very best. A scholarly cornucopia."

"In this impressive book, Richard Muller gives a clarion call for scholars to awaken from their dogmatic slumbers when approaching the early Reformed tradition and Reformed orthodoxy on the application of Christ's work, union with Christ, and the order of salvation. Muller gives an illuminating contextual reading of a broad range of sixteenth- and seventeenth-century Reformed sources. Full of nuance and fresh historical insight that cuts through muddy thinking, Calvin and the Reformed Tradition is an indispensable resource for ongoing discussions of these topics among historians and theologians."

"The relationship of the theology of the 16th-century Protestant reformers Martin Luther and John Calvin to the developed theological systems of their successors in the 17th century has been a contentious subject. . . . Muller, a leading voice in this analysis, has authored a number of works that reassess and reappraise the early modern development of the Reformed theological tradition and its development into the period of stout Reformed orthodoxy. Muller is a master of the theologies of Calvin and his heirs. . . . All scholars can be grateful for Muller's stellar works, providing primary source insights where generalizations have abounded, thereby greatly enlarging the scope of our understandings of complex issues."

"[Muller] has fought hard for a historical understanding of Calvin in his own context, castigating those who have sought to exploit the Reformer for dogmatic ends, either making Calvin a Calvinist or portraying Calvinism as a 'betrayal' of Calvin. That crusade is continued in this collection of essays, which helpfully draw together many aspects of the 'Muller thesis.' . . . Persuasively argued. [Muller] comments on a wide range of Calvin scholarship and one of his characteristics is that he does not shrink from calling a spade a spade, exposing the shortcomings of some sections of Calvin scholarship. This is compulsory reading for all with an interest in the place of Calvin in the ongoing Reformed tradition."

"With critical acumen, a judicious use of primary sources, and thorough engagement with current Calvin/Reformed scholarship, Richard Muller has masterfully aided the academy and church, especially the Reformed tradition, to understand better the relationship between Calvin's theology and those who succeeded him. Muller excels at situating an array of Reformed theologians in their socio-ecclesiastical contexts, paying close and respectful attention to their terminology, all the while being careful not to commit theological/confessional anachronism."

"Reading Richard Muller's work is always intellectually demanding yet educationally rewarding, especially for those interested in the role historical contextualization plays in understanding the thought of past theologians. Calvin and the Reformed Tradition . . . is another superb work of historical theology from Muller's pen. . . . Overall, Muller accomplishes his goal of demonstrating that--contrary to popular belief--the Reformed tradition of the 16th and 17th centuries, far from being a monolithic tradition ruled by the theology of one figure, was a movement that experienced internal developments resulting in legitimate doctrinal nuances. . . . Calvin and the Reformed Tradition persuasively continues Muller's magisterial work on historical theology. It is well documented and comprehensive enough to validate its major claims and theologically able in the description of the historical material discussed."

"[This book] is the product of many decades of research and analysis regarding the relationship between Reformation and Post-Reformation theology. If the death-blow to the 'Calvin versus the Calvinists' thesis has not already come, this book seals the fate. . . . Muller's vigorous arguments in Calvin and the Reformed Tradition depend on an acute and extensive analysis of much primary and secondary literature, with plenty of breathtaking footnotes. . . . This is a fine book."

"This is an excellent book. It is well documented with 1,005 footnotes. . . . For those interested in historical Reformed theology, it is a must read."