A Lady of Secret Devotion 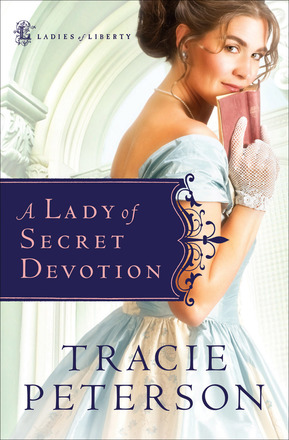 Eager to ease the financial burdens of her family, Cassandra Stover is thrilled when she is hired to be a companion to Mrs. Jameston, a wealthy society woman. Cassie finds herself living a life she'd never imagined-and growing close to the elderly woman who treats her like a daughter.

Her new position is tarnished only by Mrs. Jameston's son. As Sebastian's resentment and cruelty toward his mother mount, Cassie begins to harbor concerns for her employer's safety--and ultimately her own. When Sebastian is suspected of fraud, insurance investigator Mark Langford solicits Cassie's help to uncover the truth. But what begins as a game of pretense is quickly complicated by matters of the heart.

"Peterson has the golden touch! This third book in her LADIES OF LIBERTY series comes alive with amazing characters, memorable scenes and the lesson that having faith makes anything possible." --Patsy Glans, Romantic Times Book Review

"Peterson has the golden touch! This third book in her LADIES OF LIBERTY series comes alive with amazing characters, memorable scenes and the lesson that having faith makes anything possible." --Patsy Glans, Romantic Times Book Review

"A dream comes true for Cassandra, a well-bred Christian girl living in the mid-1800s who is hired to become a companion to a wealthy older lady. God's timing is perfect as Cassie is truly fretting about how she will ever find gainful employment. The pair hit it off right from the start and all seems too good to be true. That's when Mrs. Jameston's son moves home and life takes a bitter turn. The spoiled son is determined to take possession of his inheritance now, even if it means removing Mom from the picture with his own hands. Nothing good has come of this scoundrel of a son, and Cassie is placed in the position of either revealing his evil ways and emotionally harming Mrs. Jameston or thwarting his efforts unbeknownst to Mrs. Jameston. Rating: 3"
--PL, Libraries Alive

"A Lady of Secret Devotion by Tracie Peterson is set in 19th century Philadelphia. A young lady of modest means, Cassie Stover is hired to be a companion to Mrs. Jameston, a wealthy elderly woman. Mark Langford comes to Philadelphia to investigate the death of his best friend whom he suspects Mrs. Jameston's son may have killed. In order to help his investigation, Mark suggests that he and Cassie pretend they are courting. What begins as a game of make-believe slowly becomes more than that.

"This is a historical romance spiked with intrigue, suspense, and danger. Cassie and the other women in the novel are women of faith. Mark struggles with his until coming to a living faith.

"Apart from being a well-written Christian page-turner, the characters are likeable, the story is interesting, and it proclaims God's love for us all, without coming off as preachy.

"Other books in this series include: A Lady of Hidden Intent and A Lady of High Regard. Each book stands on its own but shares a common focus on strong-willed women in the pre-Civil War era.

"This book will appeal to fans of Tracie Peterson and those who enjoy lighthearted historical romances spiced with a little intrigue."
--Gail Whitney, Christian Library Journal, December 2009

"In 1857 Philadelphia, Cassandra Stover is elated when a kind wealthy society lady Mrs. Jameston hires her as her companion as her family needs the money. Cassie moves in to her employer's home. Whereas Mrs. Jameston treats Cassie as if she is her daughter, her son Sebastian is odious and always seems stalking her, waiting to get inside her pants; worse in Cassie's mind is he is abusive towards his mother. Widower Mark Langford has arrived in town from Boston to investigate the murder of his best friend Richard. He believes Sebastian killed Richard, but has no proof to affirm his belief. Needing to get closer to his prime suspect, Mark pretends to court Cassandra in order to find the evidence and to keep the two women safe because he thinks Sebastian will kill the females. Their fake courtship turns real as they fall in love, but stopping Sebastian from another two homicides remains Mark's priority. this third Ladies of Liberty tale (see A Lady of Hidden Intent and A Lady of High Regard) is a fabulous pre-Civil War historical romantic suspense. The story line contains a strong cast especially the lead couple. She has faith in God, country, family (including Mrs. Jameston whom she loves as a grandma) and Mark; he thanks the Lord for a second chance as his beloved late wife died seven years ago from cholera. Although the villain has no redeeming qualities, fans will appreciate this fine mid nineteenth century Americana romance summed up by Mrs. Jameston who will always love her son even though she knows he will always hurt her."
--Harriet Klausner, Midwest Book Review, September 2008