A Concise Guide to the Life of Muhammad 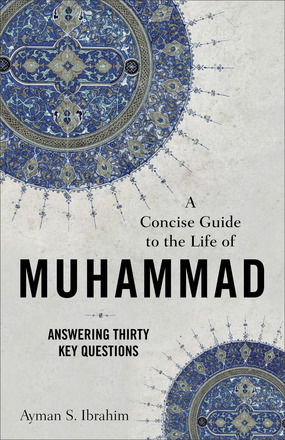 What is so unique about Muhammad? What are the reasons for the strong devotion Muslims have for him? Did he really exist? What do Muslims say about him and his teaching? Did he perform miracles? What did he say about loving one's neighbor and about those who abandon Islam? Did he teach on homosexuality and owning slaves? These are some of the thirty questions answered in this clear and concise guide to Muhammad's life and religious significance.

This companion volume to Ayman Ibrahim's A Concise Guide to the Quran answers many of the key questions non-Muslims have about Muhammad, reveals the importance of Muhammad for Christian-Muslim and Jewish-Muslim interfaith relations, examines Muslim and non-Muslim primary sources, and engages classic and modern studies on the most important human figure for scores of Muslims. This introductory guide is written for anyone with little to no knowledge of Islam who wants to learn about Muslims, their beliefs, and their prophet.

"Ibrahim has done us all a great favor in writing this book. With his expertise in early Islamic texts firmly established, he presents findings that help to sketch what Muhammad represents within the Muslim community--in all its diversity--and what the earliest sources actually say. As a historian, he points readers to invaluable resources in print and online."

"This wonderful introduction to the life and teachings of Muhammad is rigorous in its engagement with scholarship yet also highly accessible. Ibrahim tackles crucial questions with clarity and purpose, skillfully helping the reader to navigate the 'Muhammads' of legend, of tradition, and of history. I heartily commend this book."

"To understand Islam . . . it is necessary to reckon with Muhammad. Helping readers do that is the goal of A Concise Guide to the Life of Muhammad. . . . [Ibrahim] strives to present a historically accurate portrait of what can be known about Muhammad's life and teaching. . . . Ibrahim rounds out his book with a bibliography of English translations of Muslim primary sources, helpful websites regarding Islam, and a glossary of key terms. These appendixes are especially helpful to readers who want to conduct further research on Muhammad and his religion. Although Ibrahim wrote A Concise Guide to the Life of Muhammad for a general audience, I read and am reviewing it as a Christian minister. It broadened and deepened my understanding of the founder of Islam, along the way heightening the differences that exist between his religion and my own. . . . I recommend Ibrahim's book to missionaries, evangelists, pastors, and laity with a heart for Muslim evangelism. Christians cannot share the gospel with people whom they do not understand, so if we want to reach out to Muslims, we must reckon with Muhammad."