A Sourcebook of the Ancient Church 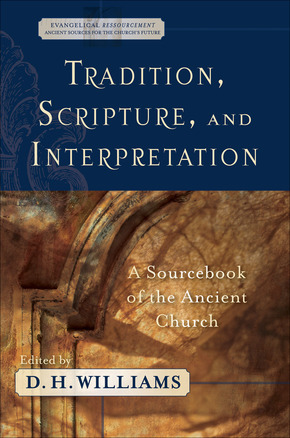 "This volume certainly accomplishes the goal of the Evangelical Ressourcement series, which is to help church thinkers and leaders reconsider the ancient understandings of Christian belief and practice. It would be of value in introductory church history classes."--H. H. Drake Williams III, Review of Biblical Literature

Tradition, Scripture, and Interpretation is the second volume in the new Evangelical Ressourcement series. This volume introduces the reader to primary sources from the first through sixth centuries with an emphasis on lesser-known, yet nonetheless important, texts.

The selections are grouped thematically and cover various crucial topics, including the rule of faith, baptismal formulations and instruction, creeds, and biblical interpretation. Within each theme, the writings are arranged chronologically, revealing how the Christian tradition on that topic developed over time. Explanatory notes provide historical background and theological context for each reading. Williams introduces the book with a chapter examining the close interplay between Scripture and tradition in the thinking of the early church. This rich resource will be especially useful to students of the early church.

About the Series: The Evangelical Ressourcement series is grounded in the belief that there is a wealth of theological, exegetical, and spiritual resources from the patristic era that is relevant for the Christian church today and into the future. Amid the current resurgence of interest in the early church, this series aims to help church thinkers and leaders reappropriate these ancient understandings of Christian belief and practice and apply them to ministry in the twenty-first century.

"Williams . . . provide[s] helpful comments and historical notes with most excerpts, as well as a clearly written, contextual introduction. General readers motivated to digest the many broad-ranging . . . selections will be rewarded with insights into early Christian thinking on literal vs. allegorical interpretation of Scripture, the development of local and conciliar creeds, and the slow, distributed development of the Bible as canon. Recommended . . . for Williams's cogent introduction and the anthology's fit into a relatively unpopulated niche in the literature."--James R. Kuhlman, Library Journal

"[A] helpful volume for understanding the importance of the early Christian church. . . . Williams provides a sampling of early Christian sources in an easily accessible format so that one interested in early church history and Christian origins can read and understand the primary documents. . . . Williams argues convincingly that the canon of the Bible and its interpretation came from the early church. . . . This volume certainly accomplishes the goal of the Evangelical Ressourcement series, which is to help church thinkers and leaders reconsider the ancient understandings of Christian belief and practice. It would be of value in introductory church history classes."--H. H. Drake Williams III, Review of Biblical Literature

"[The Evangelical Ressourcement series] is in its very conception intriguing. . . . It is difficult to escape the feeling that this book represents a significant declaration on the state and direction of evangelical theology. . . . In a helpful and lengthy introduction, Williams lays out the case for the study of ancient Christian sources in theology. . . . As Williams quite rightly shows, the basic interpretive key to the reading of the scriptures in the early church was the regula fidei, the rule of faith understood as the distillation of the apostolic preaching. . . . The selections are arranged in chronological order, and Williams gives just enough information to contextualize the passage without shifting into commentary that would distract from the material. Especially helpful is the citation following the passage, where Williams gives the text's location in English translation, generally in the aged but venerable Nicene Fathers edition if available. His selections are remarkably diverse, more than one would expect in a short work like this, and certainly show the breadth of his knowledge of the patristic corpus. . . . This Sourcebook can have a wide variety of uses. It demands no prior specialized knowledge on the part of the reader, and does a remarkably good job of balancing the need to allow primary sources to speak with their own voice while at the same time making those voices as accessible as possible. Interesting and affordable to anyone interested in the subject, it will make an ideal resource for undergraduate and Christian education students alike, as well as to seminary students new to the subject and interested lay readers. If there is to be an 'Evangelical Ressourcement', it will have to take place in the life of the church itself, and accessible texts like this will prove vital."--Travis E. Ables, Religion & Theology

"The anthology affords the reader the opportunity to encounter the most crucial texts in established resources. . . . The passages Williams assembles in the chapters on the interpretation of the Bible are especially fascinating. . . . Tradition, Scripture, and Interpretation would serve well as an introductory college textbook."--Jonathan J. Armstrong, Trinity Journal

"[The] Evangelical Ressourcement series seeks to show that the early church's import for Protestants is not less 'integral' than 'it is for Roman Catholicism or Eastern Orthodoxy.' With D. H. Williams' volume Tradition, Scripture, and Interpretation the series succeeds admirably. The book is a companion source-volume for Williams' previous book, Evangelicals and Tradition, but is plenty readable on its own."--Jason Byassee, Books & Culture

"Williams' work is recommended for both the student and the church leader. The comments following the selections are especially helpful for the novice and Williams includes a brief bibliography at the end of the work to facilitate further study of the early fathers. The book serves as a good introduction to the primary source texts on the topic and the brevity of the work is refreshing since the beginner can easily become overwhelmed at the amount of primary texts available from the period of the early church."--Steven L. James, Southwestern Journal of Theology

"[Williams] is widely respected for his numerous book-length studies and journal articles on the fathers and their achievements. . . . The present work consists in selected extracts from the most significant writers of the period, together with numerous creedal statements. The texts are arranged according to nine themes or subjects and are prefaced by Williams' own most illuminating Introduction. The book was conceived as a companion volume to the author's Evangelicals and Tradition. . . . But the Introduction and the brief commentaries throughout make it a more than worthwhile book in its own right. . . . Its great advantage . . . is the focus which it gives to its chosen themes: scripture, tradition, and their vital interplay in the minds of the church's foundational theologians."--Graham Hughes, Journal of Reformed Theology