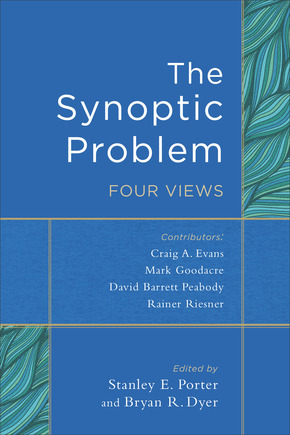 The relationship between Matthew, Mark, and Luke is one of the most contested topics in Gospel studies. How do we account for the close similarities--and differences--in the Synoptic Gospels?

In the last few decades, the standard answers to the typical questions regarding the Synoptic Problem have come under fire, while new approaches have surfaced. This up-to-date introduction, ideal for classroom use and individual study, articulates and debates the four major views. Following an overview of the issues, leading proponents of each view set forth their positions and respond to each of the other views. A concluding chapter summarizes the discussion and charts a direction for further study.

This work will be of interest to professors, students, scholars, and other readers interested in the Synoptic Problem.

"Multiple-views books on controversial biblical and theological topics have become quite popular and helpful, especially when each contributor responds to the others. This volume is particularly well done, and Porter and Dyer have enlisted outstanding representatives of each of the four most viable solutions to the Synoptic Problem. Most welcome is Riesner's emphasis on the role of oral tradition and memory in the formation of the Gospel tradition, as well as the gracious tone of all the contributors. The editors place each theory into the history of the discussion, so that students can consider this 'one-stop shopping' for scholarship on this important topic."

"For any who think that the Synoptic Problem has been solved or that its debate has stalled out, this book suggests that there is a more vibrant conversation to be engaged. Porter and Dyer have assembled a stellar team for the exchange. I can't imagine a better lineup than Evans, Goodacre, Peabody, and Riesner as spokespersons for their respective views. The Synoptic Problem is wonderfully accessible, is an ideal point of entry for those new to the topic, and offers fresh perspective on this important and perennial issue."

"Few New Testament issues have garnered more reflection and debate over the last four centuries than the Synoptic Problem. We have long needed a fresh perspective that can make us see the situation more clearly and move the discussion to a new level. This volume provides that perspective. It sums up the state of the issue and provides a way forward for the future. I highly recommend it to all readers."

"A must-read for anyone interested in understanding the Synoptic Problem! The four main views (the Two Source Hypothesis, the Farrer Hypothesis, the Two Gospel Hypothesis, and the Orality and Memory Hypothesis) are ably presented by their supporters and then critiqued by their opponents. The critiques are an excellent example of how different views can be held and debated among scholars."

"[This book] holds the potential to engage a new generation of scholars in this foundational branch of gospel studies. . . . Porter and Dyer have done well to recruit Evans, Goodacre, Peabody, and Riesner for this project. Each contributor is a skillful and well-qualified spokesman for his view. . . . The Synoptic Problem: Four Views is an enjoyable, stimulating read. It would be useful for anyone who wants an introduction to or a refresher on the Synoptic problem. It is recommended as a textbook for a course on the Synoptic problem or the Synoptic Gospels."

"The four contributors present their viewpoints well and engage one another in respectful and irenic debate. The book will be a helpful introduction to the major solutions to the Synoptic problem for students and laypersons. Students who hope that this book will guide them to a definitive solution to the Synoptic problem will likely discover that each view has both strengths and weaknesses and that they are torn between two or more good hypotheses. Hopefully, this will prompt them to color-code their Greek synopsis and carefully think through possible dependencies themselves."

"Many scholars have attempted to delineate a genealogy of literary development between the Synoptic Gospels. . . . In this helpful volume, four exponents of different theories argue their respective views. The reader benefits by being introduced to the complexity of issues in a remarkably readable package. . . . The authors are generally charitable to one another. They all energetically argue their positions, citing specific evidence. After the four 20-page initial presentations, each author receives an additional dozen pages to respond to the other papers. These responses provide further insight. . . . The editors' introduction contains one of the most effective brief overviews of the issues that I have read, orienting the reader well for the detailed exchanges that follow. . . . Each author holds his own well. . . . [A] useful collection."

"It is noble and necessary work to try and be as objective as is humanly possible about an issue and let students make up their own minds. . . . The opening chapter, by the editors of the volume, makes the topic highly accessible to the non-academic reader. Key terms are introduced, as well as major concepts and hypotheses. . . . There is so much about the Synoptic Problem that we have yet to figure out. The authors of this volume have done their best to shape the contours of the discussion, and they have done so with kindness and the utmost respect for each other. I therefore cannot recommend this book enough, even though you will likely come away from it with more questions than answers. That, however, is not a bad thing."