The Law and the Prophets

by: Stephen B. Chapman 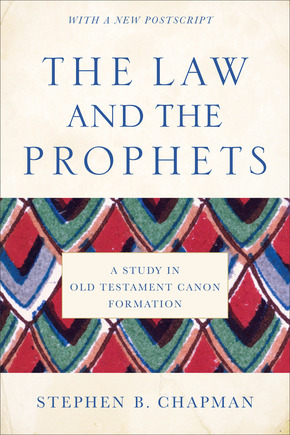 This watershed book by a leading Old Testament scholar presents an alternative perspective in the ongoing debate about the formation of the Hebrew Bible. It marshals all of the important counterarguments to the standard theory of Old Testament canon formation, showing how the Pentateuch and the Prophets developed more or less simultaneously and mutually influenced each other over time. The widely praised European edition is now available in North America with an updated bibliography and a new postscript reflecting on how the study of the Old Testament canon has developed over the last twenty years.

Contents
1. The Question of the Law and the Prophets
Introduction
The Rise of the Standard Theory
H. E. Ryle
Canon and High Criticism
J. Wellhausen
W. J. Beecher
G. Hӧlscher
Summary
The First Half of the Twentieth Century
M. L. Margolis
Mid-Century Views and New Findings
R. H. Pfeiffer
Summary
The Rise of a Canonical Approach
P. R. Ackroyd
D. N. Freedman
R. E. Clements
J. C. H. Lebram
A. C. Sundberg Jr.
T. N. Swanson
J. A. Sanders
S. Z. Leiman
J. Blenkinsopp
J. Conrad
B. S. Childs
Recent Proposals
J. Barr
J. Barton
R. T. Beckwith
N. K. Gottwald
O. H. Steck
E. E. Ellis
J. W. Miller
L. M. McDonald
Conclusions
2. "Density within History": Canon as Theological Grammar
Introduction
Ideology and Historical Criticism
P. R. Davies
A "Canonical" Approach?
H. Bloom
N. Frye
Canons, Power, and Self-Interest
C. Altieri
Canon as a Theological "Grammar"
"Self-Sumsumption" and the Old Testament Canon
The Articulation of Shared Values
A Critical Benchmark
"Canon" versus "Scripture"
3. No Prophet Like Moses?: Canonical Conclusions as Hermeneutical Guides
Introduciton
Deuteronomy 34:10-12
A Conclusion to the Torah
An Incomparability Formula
Moses as Covenant Mediator
Moses as a Prophet
Dual Agency
Summary
Malachi 3:22-24 [4:4-6]
Appendices to Malachi Alone?
Appendices to the Prophetic Corpus?
A Variety of Orders in the Prophets
Canon-Conscious Appendices
Further Deuteronomistic Background
Appendices to Malachi and the Twelve
Summary
4. The Law and . . .
Introduction
Deuteronomy 31-34
Deuteronomy 30-31
Deuteronomy 31
Deuteronomy 32
1. A Prophetic Account of History
2. Prophetic Motifs and Idioms
3. Prophetic Citations and Allusions
Conclusions regarding Deuteronomy 32
Deuteronomy 33
Summary of Deuteronomy 31-34
Joshua
A "Deuteronomistic History"
A Deuteronomistic Edition of Joshua
A Second Deuteronomistic Edition of Joshua
The Problem of Joshua 23-24
The Relation of Joshua to Judges
A Third Layer of Redaction?
Joshua 8:30-35
The Relation between Joshua 8:30-35 and 24:1-28
Redactional Summary of Joshua
Prophecy in Joshua
A Prophet like Moses
The Final Form of Joshua
5. The Law and the Words
Introduction
The Deuteronomistic History Revisited
The Book of Judges
The Books of Samuel
The Books of Kings
1 Kings 17-19, the Elijah Stories
2 Kings 17:7-23 and 21:10-15
Summary
Jeremiah
"The Law and the Words"
"My Servants the Prophets"
The "Word" and the "Words"
A "Prophet like Moses"
Summary
Zechariah 1 and 7-8
Prophecy in First Zechariah
"The Law and the Words"
Citations and Allusions
Summary
Chronicles
Prophecy in Chronicles
1. Stories about Prophets
2. The Prophetic Addresses
3. Citation Formula
Summary
Ezra-Nehemiah
Prophecy in Ezra-Nehemiah
1. A Surprising Beginning
2. A Surprising Ending
3. Prior Knowledge of the Law
4. The Authority of Prophetic Scripture
5. Prophetic "Words"
Daniel
6. The Pre-eminence of Torah?
Introduction
Counter-Indications: Ground for the Torah's Pre-eminence
Internal Evidence
External Evidence
1. Perisan Policy
2. Prior Canonization
3. Text Criticism
4. The Samaritan Pentateuch
5. The Septuagint
6. The Dead Sea Scrolls
7. Ben Sira
8. The Apocrypha and Pseudepigrapha
9. The Cessation of Prophecy
10. The New Testament
11. The Sadducees' Canon
12. The Synagogue Lectionaries
13. Philo
14. Josephus
15. Literary Position
The Twin Authority of Law and Prophets
Christian Tradition
Jewish Tradition
Reconstruction and Conclusions
The Place of the Writings?
Theological Implications for Jewish and Christian Traditions
Indexes

"The canon of the Old Testament has become a central issue in contemporary Old Testament scholarship. . . . [This book] deserves to be a major landmark within the debate. . . . Chapman illuminatingly analyzes both scholarly debate and key biblical texts and persuasively contests received wisdom. . . . [The book] shows maturity of thought and expression throughout."

"An important and learned book. . . . [Chapman] succeeds in raising large questions about many traditional assumptions, and his book deserves to be widely and carefully read, since it contains many important insights."

Journal for the Study of the Old Testament

"Chapman should be commended for questioning linear models of canonical formation that offer a too simplistic and teleological understanding. Such reexamination of traditions has informed our understanding of monotheism, law, and other categories in the progress of Israelite history and theology."

"The issues of canon and canon formation have been progressively drawn into a more central position in Old Testament and biblical studies generally. . . . Chapman undoubtedly makes one of the fullest and most interesting contributions to the discussion and to the whole attempt to use canon as a simple arbiter of authority. Its primary goal is to show that in ancient Judaism Law (Torah) and Prophets emerged side-by-side as related, and mutually supportive, sources of authority. In pursuing this task, however, Chapman raises a great many interesting and valuable insights into the nature of a scriptural canon. . . . Altogether this is an excellent study. . . . Chapman has given us a fine piece of work, which is all the more welcome in that it raises further issues for examination."

"This is an important and readable book. It shows that both the Law and the Prophets are authoritative Scripture that are aware of and play off each other. It is not a case of Torah priority or of the Prophets being before and the source of the Law, as some critics hold. This book should be in all academic theological libraries."

"This is a fine study on the intriguing question of the biblical canon. Chapman offers an alternative model of the origin of Law and Prophets. . . . The book contains a lot of food for thought; maybe the interpretative model of a 'theological grammar' will allow us to view the plurality of biblical texts in a different light. No serious future study can afford to overlook Chapman's insights."

"This publication is recommended to everyone interested in the notion of canon and every scholar who wrestles with the history of canon formation. Chapman's theory will have to be reckoned with in all future research of the Old Testament canon."