The First One Hundred Years of Christianity

An Introduction to Its History, Literature, and Development 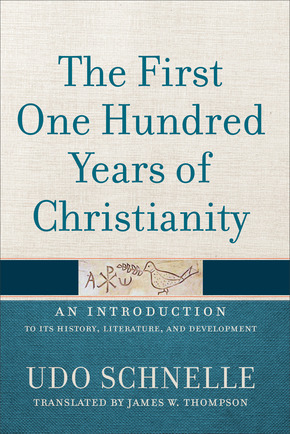 Beginning as a marginal group in Galilee, the movement initiated by Jesus of Nazareth became a world religion within one hundred years, demonstrating exclusive loyalty to Jesus Christ and its community of brothers and sisters and a missionary spirit toward outsiders. Why, among various religious movements, did Christianity succeed?

This major work by internationally renowned scholar Udo Schnelle traces the historical, cultural, and theological influences and developments of the early years of the Christian movement. Schnelle explores the dangers facing Christians and the attractiveness of the movement that led to its amazing growth. He demonstrates how Christianity provided an intellectual framework, a literature, and socialization among converts that led to its enduring influence.

1. On Writing a History of Origins
1.1 History as Interpretation of the Present and the Past
1.2 History and Method
2. Definition and Demarcation of the Epoch
2.1 Primitive Christianity or Early Christianity?
2.2 The Chronological Framework
3. Presuppositions and Contexts
3.1 Hellenism as a World Culture
3.2 Greco-Roman Culture
3.3 Judaism
3.4 The Political and Economic Situation in the Roman Empire in the First and Second Centuries CE
4. The New Movement of Christ-Believers
4.1 The Easter Events
4.2 The Origin of Christology
4.3 The Founder of a New Discourse and New Thinking
5. The Jerusalem Church
5.1 The Beginnings
5.2 Groups and Persons
5.3 Places: The Temple
5.4 Conflicts
5.5 Theological Institutions and Discourse
5.6 Texts: The Passion Narrative
5.7 The Theological Development of the Early Jerusalem Church
6. Early Churches and Early Mission outside of Jerusalem
6.1 Contexts: Mobility and Religious-Philosophical Variety in the Roman Empire
6.2 Persons
6.3 Groups: The Jesus Movement
6.4 Lands and Places
6.5 Competitors and Conflicts
6.6 The Development of the Community's Own Cult Praxis and Theology: The First Forms of Institutionalization
6.7 Texts
6.8 The First Missionary Journey and the Mission to the Gentiles without the Requirement of Circumcision
6.9 The Three Great Currents at the Beginning
7. The Apostolic Conference
7.1 The Initial Conflict
7.2 The Essential Problem
7.3 The Process
7.4 The Result
7.5 Interpretations of the Outcome
7.6 The Incident at Antioch
8. The Independent Mission of Paul
8.1 Perspective, Process, and Conflicts
8.2 Persons
8.3 Structures
8.4 External Discourse
8.5 Internal Discourse
8.6 Theology in Letter Form: The Pauline Letters
8.7 Paul and the Development of Early Christianity as an Independent Movement
9. The Crisis of Early Christianity around 70 CE
9.1 The Deaths of Peter, Paul, and James and the First Persecutions
9.2 The Destruction of the Temple, the Fall of the Jerusalem Church, and the Fiscus Judaicus
9.3 The Rise of the Flavians
9.4 The Writing of the Gospels and Pseudepigraphy as Innovative Responses to Crises
10. The Establishment of Early Christianity
10.1 A New Genre for a New Era: The Gospels
10.2 The Synoptic Gospels and Acts as Master Narratives
10.3 The Continuing Legacy of Paul
10.4 Johannine Christianity as the Fourth Great Stream
10.5 Jewish Christianity as an Enduring Power
10.6 Perceptions by Outsiders
11. Dangers and Threats
11.1 The Delay of the Parousia
11.2 Poor and Rich
11.3 Controversies, False Teachers, and Opponents
11.4 Structures and Offices
11.5 Conflicts with Judaism after 70 CE
12. Persecutions of Christians and the Imperial Cult
12.1 The Imperial Cult as a Political Religion
12.2 Persecution under Nero
12.3 Persecution under Domitian?
12.4 Pliny and Trajan concerning Christianity
13. Early Christianity as an Independent Movement
13.1 The New Narrative and the New Language of the Christians
13.2 New Perspectives about God
13.3 Serving as a Model of Success
13.4 Early Christianity as a Religion of the City and of Education
13.5 The Major Theological Currents and Networks near the End of the First Century
13.6 The Expansion of Early Christianity
14. The Transition to the Ancient Church
14.1 Claims to Power and Established Structures
14.2 The Emergence of Another Message: Early Gnosticism
15. Fifteen Reasons for the Success of Early Christianity
Works Cited
Indexes

"Udo Schnelle, one of Germany's leading New Testament scholars, has produced a comprehensive account of the growth and development of early Christianity. Thoroughly at home in all the relevant ancient texts and in critical dialogue with contemporary scholars, Schnelle sets the development of the church against the complex background of Greco-Roman and Jewish culture. He carefully traces the ways in which communities of Jesus believers grew and produced their distinctive literature. This is a rich and rewarding resource for serious students of early Christianity, particularly useful for introducing English readers to a wealth of German scholarship."

"This immense undertaking is no light survey but a wide-ranging, comprehensive assessment of most of the major questions and issues in contemporary scholarship with regard to the transition from charismatic movement to Early Christianity. It takes balanced and well-informed positions on disputed issues. Rather than an introduction for beginners, it is a treasury of scholarship and interpretation for those who want more."

"There is no better New Testament scholar active in Europe today than Udo Schnelle, whose penetrating account of the first hundred years of early Christian history has now been ably translated into English by James Thompson. Highly recommended as both a textbook and a reference volume."

"Professor Schnelle's distinguished career in New Testament scholarship and theology provides the foundation for this substantial history of Christianity's first hundred years. Eschewing fads and popularizing the byways of noncanonical gospels, Schnelle makes the case for the deserved success of Jesus's followers in establishing an independent religious movement that originated with the person, ministry, and teaching of Jesus. This movement's new vision of God, salvation, and conduct in community was key to its success, as was the crucial role played by written texts and education."

"Written clearly and judiciously, this up-to-date integration of early Christian history and theology will be of interest to all students of the beginnings of Christianity and the formation of the New Testament. This succinct volume should instantly become a standard textbook and the go-to book for all interested students, teachers, and pastors. Thanks go to Baker Academic and James Thompson for making this important book available in English."

"This translation makes Udo Schnelle's monumental scholarship about the formative period of early Christianity available to English-speaking audiences. The book outlines the origins of the Jesus movement and its rapid development within the multifaceted matrix of the ancient Greco-Roman world and early Judaism. It is clear in its structure, solid in its argumentation, and broad in its scope, while still remaining attentive to important details. Benefiting from Thompson's sensitive and competent translation, Schnelle's sweeping depiction of the past will find the approval of many biblical scholars. I highly recommend this work as a comprehensive and trustworthy textbook for graduate classes in early Christianity/New Testament."

Christian A. Eberhart, professor and program director of religious studies, University of Houston

Praise for the German Edition:

"This volume could be an excellent textbook . . . for any course on the beginnings of Christianity, a very good example of how a historical study of the period should be undertaken."