The Fear of the Lord Is Wisdom

A Theological Introduction to Wisdom in Israel 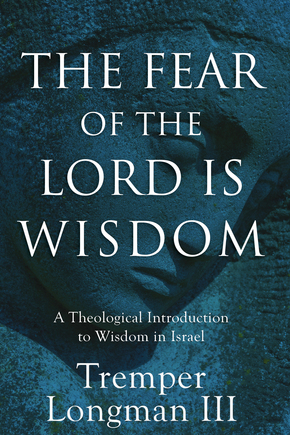 Wisdom plays an important role in the Old Testament, particularly in Proverbs, Job, and Ecclesiastes. This major work from renowned scholar Tremper Longman III examines wisdom in the Old Testament and explores its theological influence on the intertestamental books, the Dead Sea Scrolls, and especially the New Testament.

Longman notes that wisdom is a practical category (the skill of living), an ethical category (a wise person is a virtuous person), and most foundationally a theological category (the fear of the Lord is the beginning of wisdom). The author discusses Israelite wisdom in the context of the broader ancient Near East, treats the connection between wisdom in the New Testament and in the Old Testament, and deals with a number of contested issues, such as the relationship of wisdom to prophecy, history, and law.

Prologue
Part 1: The Heart of Wisdom: Proverbs, Ecclesiastes, and Job
1. Proverbs: The Fear of the Lord Is the Beginning of Wisdom
2. Ecclesiastes: Fear God, Obey the Commandments, and Live in Light of the Coming Judgment
3. The Book of Job: "Behold the Fear of the Lord Is Wisdom" (Job 28:28)
Part 2: Wisdom Elsewhere in the Old Testament
4. Other Sources of Wisdom: Deuteronomy, Psalms, Song of Songs, and Prophecy
5. Joseph and Daniel: Paragons of Wisdom
6. Adam and Solomon: From the Heights of Wisdom to the Depths of Folly
Part 3: Israel's Wisdom: Cosmopolitan or Unique?
7. Sources of Wisdom: Experience, Observation, Tradition, Correction, and Ultimately Revelation
8. Wisdom, Creation, and (Dis)order
9. Israelite Wisdom in Its Ancient Near Eastern Setting
10. Wisdom, Covenant, and Law
Part 4: Further Refining Our Understanding of Wisdom
11. The Consequences of Wise and Foolish Behavior: The Issue of Retribution Theology
12. The Social Setting of Wisdom
13. Wisdom and Gender
Part 5: The Afterlife of Israel's Wisdom
14. Intertestamental Wisdom from the Apocrypha to the Dead Sea Scrolls
15. New Testament Wisdom
Appendix 1: Wisdom in the Twenty-First Century
Appendix 2: Is Wisdom Literature a Genre?
Indexes

"Israel's wisdom literature has long been misunderstood as secular and experiential, a foreign import and therefore a human response to the challenges of life rather than a divine word. By building on newer work demonstrating wisdom's religious roots and revelatory character, Longman masterfully explores the theological particularity of Israel's wisdom tradition. The result is an excellent introduction for students and the general Christian reader, as well as a fitting culmination of Longman's career-long engagement with this literature. His book is unusually comprehensive in scope, extending its coverage to the Apocrypha, the Dead Sea Scrolls, and the New Testament. It concludes with thoughtful reflections on the potential for Israel's wisdom to contribute significantly to church and society in the twenty-first century."

"With masterful elegance Longman navigates through the topic of wisdom in the Old Testament, making a compelling and exegetically rich argument that wisdom is not independent of the redemptive-historical narrative of the Old Testament but intrinsic to it. Insightful and refreshing, this brilliant exposition of wisdom is a must read for anyone seeking a more coherent theology of wisdom and its place in the canon."

"Longman doesn't get swept away by fashions, but neither does he dismiss ideas merely because they are new. He looks at them with interest but keeps a cool head. So he is the kind of person that the wise men and women of Israel would appreciate, and he appreciates them. His book is a balanced and informative introduction both to a 'distinctive but not discordant note' within the Old Testament and to its theological message."

"Longman provides a combination of innovative scholarship and clear, accessible prose. He covers the tradition's bases but also addresses a postmodern reading context. The Fear of the Lord Is Wisdom will be an excellent guide for undergraduates, seminarians, and scholars alike."

"Longman once again makes the riches of the Old Testament accessible to readers today. After unpacking the core texts related to the wisdom tradition in the Old Testament, he highlights key features that prepare us to read these texts theologically with greater sensitivity to their historical and canonical contexts."

"Longman offers a synchronic theological treatment of wisdom that is both comprehensive and accessible. His extensive experience with the topic yields a seasoned pedagogical and theological contribution to the foundational biblical concept of wisdom. I recommend this book warmly and will be using it as a resource in my own teaching."

"Longman challenges persistent assumptions about wisdom in Israel and provides an introduction to wisdom theology that casts aside the constraints of a strict conception of the wisdom literature genre. He explores wisdom as a concept across the Hebrew Bible; through ancient Near Eastern, Second Temple, and New Testament texts; and into the twenty-first century. His treatment transcends the oppositions of common depictions of biblical wisdom, instead arguing that wisdom is both practical and theological, universal and particular to Israel, tied to creation theology and to redemptive history and covenant. This clear and accessible discussion of the fundamental theological questions these texts raise will also prompt readers to consider biblical wisdom as both ancient and relevant."

A Jesus Creed 2017 Old Testament Book of the Year

"A fresh and engaging look at the subject of wisdom in ancient Israel. . . . This work has much to commend it. In so many places, Longman does not settle for scholarly consensus but questions issues by looking at the text in a canonical context. Longman also does a great service by moving beyond the traditional 'wisdom literature' into other parts of the OT, and especially the intertestamental and NT texts. In addition, the work has strong application to the church, not simply scholars. . . . The author's description of the twenty-first century sage is a veritable manual on discipleship for the modern believer and one of the best parts of the book. . . . An excellent new work on the wisdom of Israel, useful for the college or seminary level and helpful for the academy and the church. For the evangelical scholar, this is a beneficial treatment of wisdom that properly balances historical and scholarly questions with looking at the text itself. Pastors are also well served to study this treatment of wisdom."

"[A] fresh exploration. . . . Both seasoned students of the Bible and relative newcomers to wisdom literature will find much to appreciate in this latest work by a well-known and respected biblical scholar."

"Longman has brought together his over three decades of reflection and academic rigor on biblical wisdom into a theological introduction that synchronically traces the theme both inside and out of the Old Testament. . . . Longman meticulously surveys the literature and demonstrates a consistent and coherent theological category that threads the redemptive-historical narrative. It is a thrilling and comprehensive study that does much to add value to the genre for contemporary audiences. . . . A fascinating display of biblical theology that uncovers a life-giving aspect of biblical wisdom, bringing a fresh sense of relevance to a seemingly stagnate body of literature. Longman is exhaustive and comprehensive, but readable and accessible. There are few books on the market that provide the level of breadth and depth regarding biblical wisdom as Longman has demonstrated here. This is an important book that should be used and read widely. It comes highly recommended."