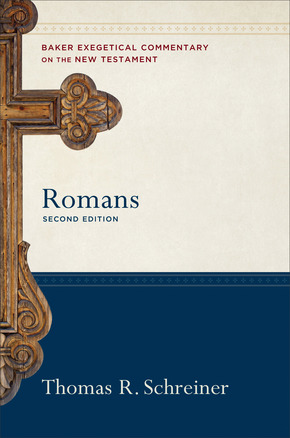 This substantive evangelical commentary on Romans by a leading biblical scholar is one of the most popular in the award-winning BECNT series and has been praised as a great preaching commentary. This new edition, updated and revised throughout, reflects Thomas Schreiner's mature thinking on various interpretive issues. As with all BECNT volumes, this commentary features the author's detailed interaction with the Greek text, extensive research, thoughtful verse-by-verse exegesis, and a user-friendly design. It admirably achieves the dual aims of the series--academic sophistication with pastoral sensitivity and accessibility--making it a useful tool for pastors, church leaders, students, and teachers.

About the Series
The Baker Exegetical Commentary on the New Testament (BECNT) series provides commentaries that blend scholarly depth with readability, exegetical detail with sensitivity to the whole, and attention to critical problems with theological relevance.

"Schreiner has skillfully executed a thoroughgoing revision of his significant commentary on Paul's magisterial letter to Roman Christians. Those who own the first edition will want to discover how Schreiner's thinking has developed over time, but all who are interested in the interpretation and proclamation of the apostle's most influential letter will do well to have the second edition of this consequential commentary close at hand. Congratulations on this significant achievement."

"Schreiner's revised Romans commentary is marked by lucid, evenhanded exegesis; thorough but fleet-footed interaction with the latest scholarship; and a wonderful balance of breadth and depth. One of the best commentaries on Romans just got even better and should be on the shelf of all students, preachers, and teachers of this great letter."

"Well known for his accessible and theologically sensitive writings, Schreiner has produced a wonderful update to his highly regarded commentary on Romans. More than a few tweaks, this project is a full-blown update: the bibliography is current, the discussions are more refined, and the material is better organized. Schreiner rightly argues that Paul's letter was written to put God's glory on display. I expect this volume to be a source of wisdom for decades to come for scholars, students, pastors, and laypeople. Highly recommended!"

"Schreiner's commentary on Romans is a very good contribution to the study of this Pauline epistle. Schreiner has asked the right questions about it and given balanced answers to them. His commentary will be a great help to students, teachers, and general educated readers of the Pauline letters, especially to pastors who seek to preach on Romans."

"Schreiner has produced an exemplary commentary of one of the most challenging books of the New Testament canon. His book contains the kind of incisive exegesis and theological astuteness that are mandatory for a Romans commentary. Schreiner's insightful discussions unfailingly lead the reader to the heart of an issue, his arguments are clearly presented, and his conclusions are carefully and wisely drawn. The scholarship is informed and up-to-date. The end result is an exceptionally clear and concise treatment, yet with an impressive amount of detail. Schreiner's work will take its place among the best commentaries on Romans currently available."

"As I preach through Romans I will continue to reach for this commentary with joy and hope. There are at least four reasons. First, Schreiner bows with reverence before the authority of Paul's letter as God's inspired Word. Second, he submits meticulously to the grammatical and historical particularities of the text, tracing out Paul's line of thinking in his own terms. Third, he wrestles with recent scholarly thought (without getting lost). Fourth, he is faithful in holding up the manifestly God-centered theme of this greatest of all letters, namely, that 'in Romans God's ultimate purpose is to display his glory to all people.'"

Praise for the BECNT Series

"This series has set a new standard in reader-friendliness with its attractive presentation that combines detailed exegetical comment on the Greek text with accessibility for those who have little or no knowledge of the original language of the New Testament."

I. Howard Marshall, University of Aberdeen

"A clearly written, well-informed guide through the text of this important letter."

"This is a serious work which will be well received by those who wish to dig deeply into the riches of the Epistle to the Romans."

"Sermons, Bible studies and lectures all stand to benefit greatly from the wealth of material between its covers."

"Many excellent commentaries have been written on Paul's letter to the Romans, and this recent contribution compares favorably to the best in that tradition."

"This is a valuable addition to the long list of English commentaries on Romans, and one that should be especially welcome."

"Schreiner's commentary is rigorous, thorough, and conservative, not to mention remarkably accurate in its typography, given the complexity of it formatting."

"Among the many recent solid commentaries on the book of Romans, this new commentary in the Baker Exegetical Commentary of the New Testament series deserves respect."

"Pastors and teachers looking for current, scholarly, decidedly evangelical commentary on Romans will find this volume worth the investment."

"Schreiner's commentary is clear and insightful."

"A massive, excellently done volume that should be helpful to sermon preparation."

Praise for the BECNT Series

"In this age of unprecedented proliferation of biblical commentary series, it is an outstanding accomplishment for the Baker Exegetical series consistently to have produced what with only rare exceptions have become the best available commentaries on the Greek text of the New Testament book or books treated."

"Rigorous exegesis by seasoned scholars with explicit evangelical commitments. This is also one of the best-designed, easy-to-read series as it includes intro matters, then each commentator's translation, commentary, and textual notes for every passage. Very reliable."

Between the Times blog