Retrieving the Classic Reformed Approach to Defending the Faith 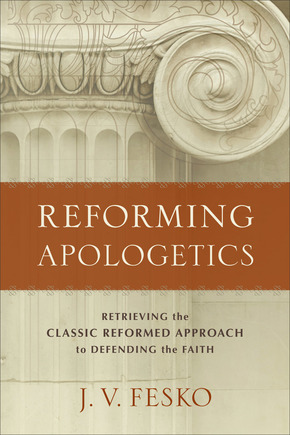 Challenging the dominant Van Tillian approach in Reformed apologetics, this book by a leading expert in contemporary Reformed theology sets forth the principles that undergird a classic Reformed approach. J. V. Fesko's detailed exegetical, theological, and historical argument takes as its starting point the classical Reformed understanding of the "two books" of God's revelation: nature and Scripture. Believers should always rest on the authority of Scripture but also can and should appeal to the book of nature in the apologetic task.

"Reforming Apologetics presents a compelling case for the shape and content of Reformed apologetics by reconnecting it with the roots of the Reformed faith as found in the thought of the Reformers and Reformed Orthodoxy and by providing a profound and much-needed critique of the Neo-Calvinist approach of Dooyeweerd and Van Til. Fesko carefully examines the nineteenth-century idealist backgrounds of the Van Tilian and Dooyeweerdian approaches and demonstrates their flawed epistemology. He outlines the enduring strength of the genuine tradition of the Reformation, which begins with the authority of Scripture but also recognizes the presence of intuitions and concepts common to believer and unbeliever and of the natural law written on the heart--common grounds of discourse necessary to the apologetic task."

"Fesko writes with learning and verve as he ploughs up the baked ground of much current Reformed apologetics, letting in light and fresh air. His basic charge is that the apologetics of Van Til and Dooyeweerd is inconsistent in its basic method: they criticized other apologetics as unholy mixtures of the biblical and the pagan, while their own efforts did not escape from such 'synthesis.' In the final chapter, Fesko sets out afresh the methods and objectives of the classical tradition of Reformed apologetics. If you are skeptical about whether a book on apologetics can be good reading, then this incisive treatment will convince you."

Paul Helm, author of Human Nature from Calvin to Edwards

"Reformed theologians haven't paid very careful attention to the doctrine of nature in the twentieth century, leading to a number of unfortunate consequences. Fesko helpfully reminds us of deeper Christian and Reformed reflection on what Holy Scripture reveals about nature and of its significant implications for Christian apologetics. It's a grace to think anew about God's creative goodness, and Fesko provides a helpful prompt in this important direction."

"Fesko presents an approach to apologetics that reaffirms the theological outlook of the sixteenth- and seventeenth-century Reformed fathers and scholastics. Its peculiar strength is in arguing for God's revelation in the created order as the source of common principles shared by believer and unbeliever alike. These common principles give Christians the epistemological common ground necessary to begin meaningfully engaging unbelievers in defending the faith. Along the way, Fesko offers thoughtful criticism of various neo-Calvinist approaches to apologetics, including those of Herman Dooyeweerd and Cornelius Van Til. Readers are sure to benefit from this challenging volume as they consider how to faithfully defend the Christian faith."

"As one committed to classical Reformed theology and a classical approach to apologetics, and as one who has often been told that the two are inherently antithetical, I am encouraged that the resurgence of research into early Protestant orthodoxy is leading Reformed theologians to reexamine the conventional wisdom on these issues. While remaining sympathetic to Van Til and other like-minded theologians, Fesko has raised questions that cannot be ignored. Whatever one's stance on natural revelation, natural theology, or apologetics, it is hard to believe that anyone would deny that this is an important book. It may prove to be a game changer. I hope it will prove to be a mind changer."

"Fesko has given us a clear, scholarly, and comprehensive analysis and critique of post-Enlightenment Reformed apologetics. His work goes a long way toward restoring classical Reformed theology and apologetics."

"Within the Reformed community, I predict this will be one of the most important theological works of the last several years. Fesko does not seek to refute presuppositional apologetics so much as he makes the convincing case that Van Til's approach to defending the faith is not adequate by itself. . . . Fesko argues that the book of nature sits on the shelf unused, when Reformed theologians and practitioners should not be afraid to use it."