Loving the Poor, Saving the Rich 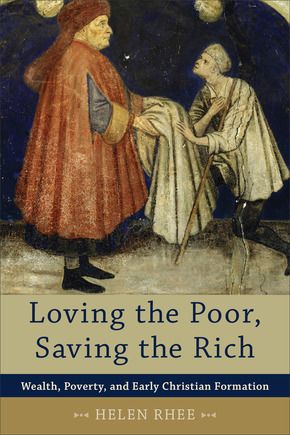 "An excellent and deeply informed study. This book is essential reading for anyone interested in early and contemporary Christian understandings and practices of wealth and poverty. I commend it highly to scholars and students alike."--David J. Downs, Fuller Theological Seminary

The issue of wealth and poverty and its relationship to Christian faith is as ancient as the New Testament and reaches even further back to the Hebrew Scriptures. From the beginnings of the Christian movement, the issue of how to deal with riches and care for the poor formed an important aspect of Christian discipleship.

This careful study analyzes the significance of wealth and poverty in constructing Christian identity in the complex socioeconomic situation and cultural milieu of the early Roman Empire. Helen Rhee shows how early Christians adopted, appropriated, and transformed the Jewish and Greco-Roman moral teachings and practices of giving and patronage. She examines how early Christians developed their distinctive theology and social understanding of wealth and the wealthy on one hand and of poverty and the poor on the other, demonstrating that this understanding impacted early Christian identity formation. She also explores the vital role wealth and poverty played in the construction of eschatology, soteriology, and ecclesiology in the social and cultural context of the time. In addition, the book draws out relevant implications of early Christian thought and practice for the contemporary church. Professors and students in courses on Christian origins, early Christianity, church history, and Christian ethics will value this work.

"Helen Rhee's Loving the Poor, Saving the Rich provides an excellent and deeply informed study of early Christian views of wealth and poverty. Rhee is especially sensitive to the social contexts of nascent Christian economic discourse. She presents a compelling and highly engaging analysis of the role that theologies and practices of wealth and poverty played in shaping the emergence of a distinctively Christian identity in the pre-Constantinian period. This book is essential reading for anyone interested in early and contemporary Christian understandings and practices of wealth and poverty. I commend it highly to scholars and students alike, and I will enthusiastically use it in my own research and teaching."

"Helen Rhee's new book is the first in thirty years to provide an in-depth focus on responsible Christian giving in second- and third-century Greco-Roman church communities--and what that means for today. Historically sensitive and accurate, Loving the Poor, Saving the Rich is a welcome pastoral call to affirm the physicality of redemption and the grace of doing good."

"The past ten years have witnessed a flurry of studies on wealth, poverty, and Christianity that have tended to focus on the New Testament and post-Constantinian periods. In Loving the Poor, Saving the Rich, Rhee produces what we have all been waiting for: a sensitive study that documents not just the 'what' but the 'why' of the important trajectory of a small and tentative Jesus movement within Greco-Roman society to an imperially endorsed and fiscally powerful church. From its beautifully articulated historical context to its final chapter that speaks to the contemporary Christian, this work sweeps beyond a mere historical study into the realms of inspiration. It is a sheer pleasure to read."

"In contrast to our modern world's way of talking about issues of wealth and poverty, Rhee takes us back to a time when confronting wealth and addressing the concerns of poverty were identity-forming experiences for the Christian church. . . . Rhee's conclusions yield some valuable reminders that the world of early Christianity invites the world of modern Christianity to live more simply. I think Rhee will be happy if even this is as far as most readers go after reading her delightful and informative book."

"This is a well-written survey peppered with many interesting ideas. . . . Students can learn much about the osmotic impact of the poverty-wealth polarity on the identity of early Christianity from this elegantly written book. Its greatest strength is its encyclopedic grasp of a topic that for far too long has been forced to stand on the periphery of serious attention in New Testament/patristic studies."

"This is a solidly researched study that is a fine starting place for research and reflection on issues of wealth and poverty in the first four centuries of Christian history."

"This study is a delightful introduction to early Christian history in general and early Christian perspectives on wealth and poverty in particular. It discusses many important patristic writings on the topic of wealth and poverty. Its argument is methodical and to-the-point. It will be a great supplementary reading for any undergraduate or graduate early church history course."

"Helen Rhee makes a significant contribution to conversations about issues at the intersection of early Christian theological reflection and socioeconomics. Rhee draws upon a comprehensive collection of literary and archaeological sources. . . . This is a valuable resource for anyone interested in mining the riches of Christian traditions about wealth and poverty. . . . One of the book's strengths is its comprehensive collection of sources relevant to the study of socioeconomic issues in early Christianity. Rhee's readings and the bibliography will interest anyone who wants to pursue research in this area. The treatment raises intriguing questions for further exploration."

"In Sollicitudo Rei Socialis (par. 42), Pope John Paul II declared that 'the whole tradition of the Church bears witness' to a preferential option for the poor. Most Christians would agree--but if asked to describe or defend that tradition, we find ourselves facing complex historical questions. A vast body of scholarship has explored the tradition's beginnings in the community's early memory of Jesus . . . and in the canonical New Testament. Another huge corpus of literature has grown around the flowering of patristic commentary and the great ecumenical councils of the post-Constantinian church. In this book Helen Rhee focuses on an in-between period, relatively neglected by historians of social ethics, but crucial to our understanding of the issues--the second and third centuries, when the Christian movement was sorting out what and who it was. . . . A small book for an enormous topic, Loving the Poor, Saving the Rich raises far more questions than it answers. That, surely, was the author's intention."

"Loving the Poor, Saving the Rich is an excellent addition to the corpus of literature on wealth and poverty in early Christianity. . . . The volume's strength lies in its ability to connect ancient economics with early Christian theology and ethics. . . . Rhee's contribution to the study of wealth and poverty in early Christianity is quite commendable. It is written with a keen scholarly awareness of the problems and nuances related to the field, and written in a language that is accessible both to experts and intermediate students--a valuable and highly recommended read."

"With adept and thorough engagement of primary and secondary sources, [Rhee] expertly situates the moral teaching of the primitive Church on such matters as avarice, luxury, almsgiving, simplicity, wealth, social status, patronage, and poverty in their proper historical and social contexts. For those who hope to ground their economic ethics in the Christian tradition, particularly the early Church, Loving the Poor, Saving the Rich is an invaluable resource that sets a high bar for any future study. . . . Any who are interested in the subject of wealth and poverty in early Christianity would do well to begin with Loving the Poor, Saving the Rich."

"This book is an excellent resource for those interested in learning about early Christian interpretations of wealth and poverty and their relationship to Christian identity. It is an important and needed reminder for affluent Christians of their responsibility to care for the poor, and Rhee's broad conclusions about Christian responsibility are appropriate. Her analyses are, more often than not, measured and nuanced, and she displays a refreshing degree of appreciation for free-market capitalism, if not always accurately defined, that is all too uncommon in academia's contemporary political climate."

"[This book] confronts us squarely with the contemporary relevance of what the Christians of the second and third centuries said and did about wealth and poverty in their day. I particularly enjoyed [Rhee's] chapters on background and early Christian practice. . . . In this fine book Rhee catalogues in detail not only the teaching of Christian luminaries such as Clement of Alexandria on wealth and poverty, but also what those early Christians did about it all. . . . Rhee's final chapter is impressive. Drawing on mainly, but not only, evangelical scholarship and sources, she offers a fair but rigorous appraisal of contemporary capitalism in the light of 'distributive justice.' She is also challenging but fair to the 'prosperity gospel' such as its Pentecostal expressions in Latin America. . . . This well-researched book deserves to be widely read. It presents us fairly and squarely with what is the biggest challenge of being a disciple of Jesus in Britain today: the issue of wealth and poverty."