Jesus and the Forces of Death

The Gospels’ Portrayal of Ritual Impurity within First-Century Judaism 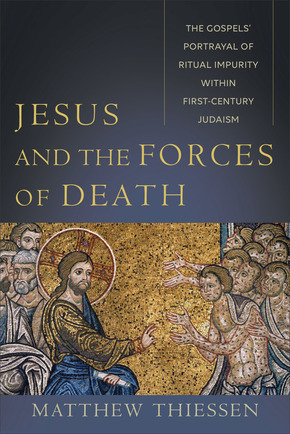 "Utterly fresh and innovative. . . . Thiessen summons his reader to nothing less than a radical reimagining of Christian origins."--Paula Fredriksen, Review of Biblical Literature

Although most people acknowledge that Jesus was a first-century Jew, interpreters of the Gospels often present him as opposed to Jewish law and customs--especially when considering his numerous encounters with the ritually impure. Matthew Thiessen corrects this popular misconception by placing Jesus within the Judaism of his day. Thiessen demonstrates that the Gospel writers depict Jesus opposing ritual impurity itself, not the Jewish ritual purity system or the Jewish law.

This fresh interpretation of significant passages from the Gospels shows that throughout his life, Jesus destroys forces of death and impurity while upholding the Jewish law. Professors, students, and scholars of Jesus and the New Testament will value this work.

"Thiessen's masterful study puts to rest the pervasive and false view that Jesus--as portrayed in the canonical Gospels--opposed the ancient Jewish purity laws. Thiessen argues convincingly that the Gospels depict Jesus not as dismantling the Jewish purity system but as destroying the forces of death that result in ritual impurity. The book is compelling and wonderfully written--a must-read for anyone interested in Jesus, the Gospels, and the ins and outs of ancient Jewish law and practice. It also makes a powerful case for the ongoing relevance of the Hebrew Bible for a historical understanding of Christianity and for Christians today."

"Matthew Thiessen's Jesus and the Forces of Death is a much-needed historical and theological intervention. For far too long, constricted ideas and damaging misinterpretations of first-century Judaism and Jesus's ministry have severely limited interpretation of the Gospels. From scholars to students, preachers to everyday Christians, readers will encounter a Jesus here who is far more faithful to his context and thus far more life-giving in his teaching and healing alike."

"For centuries interpreters of the Gospels have mistakenly thought that Jesus battled the Jewish ritual purity system, when, in fact, he battled ritual impurity itself. For Jesus and the Evangelists, as for most ancient people, ritual impurity was a real substance, a miasma. And according to the Gospel accounts, Jesus came to destroy it--so argues Matthew Thiessen in this brilliant book. If you read this book, you will learn a thousand new things."

"Matthew Thiessen has written a thought-provoking and in-depth study on the Gospels' depiction of Jesus's work in relation to purity laws. Importantly, he demonstrates that the authors portray Jesus as acting wholly in accordance with Jewish laws. Thiessen's innovative interpretation of the Gospel stories is a welcome addition to the scholarship on purity in the New Testament. This study is sure to generate much discussion and debate."

"In Jesus and the Forces of Death Matthew Thiessen brilliantly brings the Jewish purity regulations to bear on the Gospel narratives. Thiessen's careful navigation of the distinctions between the sacred and the pure, as well as the morally and ritually impure, are worth the price of the book, but his greatest achievement is perhaps the convincing and fresh exegesis of the Gospels that his perspective yields. Challenging the proposals of previous scholars, Thiessen shows that the Gospel authors did not relax the purity requirements but rather insisted that in Jesus, the God of Israel had released a 'powerfully contagious force of holiness.' Never before have blood, skin conditions, and death been more important for understanding how the Gospels portray Jesus of Nazareth!"

Chris Keith, research professor of New Testament and early Christianity, director of the Centre for the Social-Scientific Study of the Bible, St. Mary's University, Twickenham

"Demonstrating his knowledge of and regard for Jesus's Jewish context, Thiessen convincingly discards the problematic claim that Jesus rejected or opposed the Jewish ritual purity system. What emerges from his study is a Jesus whose superior holiness purifies and removes the sources of ritual and moral impurity. Jesus introduces the powerful holiness of God into the world, thereby overcoming every source of impurity and death. Thiessen's argument is clear, elegant, and profound. A wonderful contribution to the recovery of Jesus's Jewish heritage!"

"'This is not a book about the historical Jesus,' Matthew Thiessen states firmly in the first line of his latest book. Disposing of that project's abiding historiographical problems in a few deft paragraphs, Thiessen puts his own task front and center: to read the canonical gospels' varied depictions of Jesus within the larger framework of ancient Jewish construals of ritual purity. It is an ambitious goal, since 'commentators through the centuries have almost universally misconstrued the Gospel writers' portrayals,' exactly on this issue so central to Second Temple culture. . . . Thiessen stands these received interpretations on their (collective) head. His rereading of this familiar material is utterly fresh and innovative, important both exegetically and ethically. . . . Thiessen summons his reader to nothing less than a radical reimagining of Christian origins. Jesus and the Forces of Death repatriates Christian origins to their ancient homeland, the vivid intra-Jewish contestations over the right way to live in accordance with Israel's defining privilege: God's law."

"This important and rewarding book is filled with fresh insights. Academics will appreciate Thiessen's scholarship. Preachers will experience it as both corrective and empowering."

"The best books challenge tired tropes and interpretations. Thiessen reconfigures how we should view Jesus's interactions with ritual impurity."

"A quick and compelling read about how we should interpret Jesus' attitude toward ritual impurity when we read the Gospels. . . . Thiessen offers clear and thoroughly researched arguments that Jesus is not portrayed as flippant or antagonistic towards Jewish impurity concerns. On the contrary, he desired to remove the sources of the impurity and restore them to purity. . . . I found this a very refreshing read and I highly recommend it to all students, and scholars will find it insightful as well. This is one of those books where I am shocked no one has written this before, but I am glad Thiessen has filled that need. . . . Thiessen and Baker Academic have produced a splendid contribution to scholarship, one that I will certainly commend to students as we engage with discussions about what Jesus was up to in his earthly ministry according to the Evangelists."