The Senses of Scripture in Premodern Exegesis 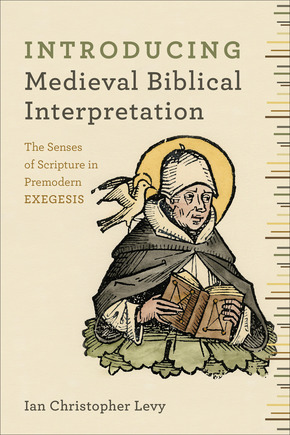 In Introducing Medieval Biblical Interpretation, Levy explains that medieval exegetes, like modern practitioners of the historical-critical method, were attuned to the nuances of ancient languages, textual variations, and cultural contexts in which the biblical books were produced. Yet these early interpreters did not stop after establishing the literal, historical sense of the text. Presupposing as they did the divine authorship of Holy Scripture, medieval exegetes maintained that the God of history imbued events, places, and people with spiritual significance so that they could point beyond themselves to deeper salvific realities. There is much meaning to be discovered through the techniques of medieval hermeneutics.

This introductory guide offers a thorough overview of medieval biblical interpretation. An opening chapter sketches the necessary background in patristic exegesis, especially the hermeneutical teaching of Augustine. The book then progresses through the Middle Ages from the eighth to the fifteenth centuries. Spanning approximately one thousand years from late antiquity up to the eve of the Reformation, Introducing Medieval Biblical Interpretation examines the major movements, developments, and historical figures of the period. Rich in primary text engagement and comprehensive in scope, it is the only current, compact introduction to the whole range of medieval exegesis.

Contents
Introduction
1. The Age of the Fathers
2. The Early Middle Ages
3. The Schools of the Eleventh Century: From Bec to Reims
4. The Monks of the Twelfth Century
5. The School of St. Victor
6. The Schools of the Twelfth Century: From Laon to Paris
7. Exegesis in the Universities of the Later Middle Ages
8. Applied Exegesis: The New Testament and the Medieval Papacy
Conclusion: Can Medieval Exegesis Speak to Us Today?
Indexes

"This is not simply a book about the past. It is a sly way of showing how to interpret the Bible today. Ian Levy, a learned scholar thoroughly at home in medieval culture and thought, introduces contemporary Christians to the deep spiritual world that opens up when the Bible is read as the Word of God."

"Levy writes of the Venerable Bede, 'Bede admits that while it is true that many before him have commented on [the book of Genesis], such works might prove too difficult for most readers and complete editions too expensive. He would summarize them, therefore, taking what could be most useful to nonexperts.' What Bede did for eighth-century readers Levy has done for twenty-first-century readers--taken a vast amount of information that often is available only to the specialist and made it easily and enjoyably accessible to non-experts. For those unfamiliar with medieval biblical interpretation, this volume is a readable yet rich introduction to the topic. It lays out the broad trajectory of medieval biblical interpretation and demonstrates its relevance for the Christian church today."

"With discriminating erudition, as deep as it is wide, and unfailing clarity of exposition, Levy covers the sweep of Western Christian biblical exegesis from the church fathers to the fifteenth century. As he shows, whether as monks, pastors, or masters in the schools, medieval exegetes had more in common than has sometimes been imagined. To one degree or another, they all drew on multilevel and intertextual exegesis as well as on the secular learning at their command. And while they all accepted the divine inspiration of the text and the authority of earlier commentators, they also took seriously their right and duty to draw selectively on scriptural texts and traditions along with their personal insights in applying the Bible to their own situational, devotional, pedagogical, and polemical agendas. Levy's book provides a rich banquet for both specialist and nonspecialist readers interested in the history of biblical exegesis and offers food for thought for scholars currently engaged in biblical study."

"This short introduction to the history of medieval biblical studies shows the relevance of this field for today's theology and exegesis. Few are in a better position to introduce this material than Ian Levy, and he does it brilliantly in this book."

"In this excellent introduction, Levy proves himself a skillful and surefooted guide across the extensive, varied, and often rugged terrain of medieval scriptural exegesis. With an admirable focus on primary texts, Levy enables a wide range of medieval interpreters--from Bede and Sedulius Scottus to Nicholas of Lyra and John Wyclif--to speak across the centuries to us, challenging modern understandings of the Bible and its interpretation. As learned as it is accessible, this volume will be as helpful to the seasoned scholar as it is instructive for the novice."

"Introducing Medieval Biblical Interpretation wrestles patiently with the problem of explaining the methods that medieval Christian exegetes brought to their reading of the Scriptures. Simultaneously a work of rigorous intellectual history and a handbook for recovering a lost way of reading, this book offers close readings of selected interpretive examples from across both the monastic and scholastic tradition, paying special attention to the interpretation of the letters of Paul. Those new to the tradition will find a book packed with insight into the way medieval exegetes read according to both the letter and the spirit. Scholars of medieval exegesis will find a concise introduction to a complex and still underused repertoire of well-chosen texts."

Rachel Fulton Brown, author of Mary and the Art of Prayer: The Hours of the Virgin in Medieval Christian Life and Thought

"Levy takes the reader through the fascinating world of eight centuries of medieval exegesis. His masterful selection of texts and authors allows the story to be told by the original voices. Paraphrasing important parts of medieval commentaries, Levy navigates us securely through a wealth of texts, figures, and information. He shows exegetical methods, explains hermeneutical concepts, and grants access to the workshops of medieval exegetes. The book is a welcome guide not only for students but also for any advanced reader with an interest in biblical exegesis. Last but not least, it supports the new awareness in contemporary exegesis of tradition, intertextuality, and the manifold dynamics of biblical texts."

"With crisp writing and clear organization, Levy walks readers through the ancient and medieval centuries of biblical interpretation. He lets the medieval voices speak for themselves through ample selections from primary source material, which makes this volume especially suited for classroom use. Pointing out that biblical scholars married faith and reason--though not always in balance--Levy displays how the Bible has been interpreted and reinterpreted in different cultural, intellectual, and chronological contexts. It is the proverbial 'one book' you'd place in someone's hand."

"This book offers a fascinating tour of the ways our forebears in the faith read the Bible. Before the historical-critical method became our modern norm, interpreters commonly wrestled with the historical and spiritual meanings of God's Word. Many modern readers are ignorant of the trends and methods that permeated this period that occupies the majority of church history. While Levy does not imply that we should abandon the historical-critical method, he does raise the question of what may be learned from our theological predecessors. Remembering that we are members of a 2,000-year-old community of readers may enhance and enrich our own reading of the Bible."