In the Name of Jesus 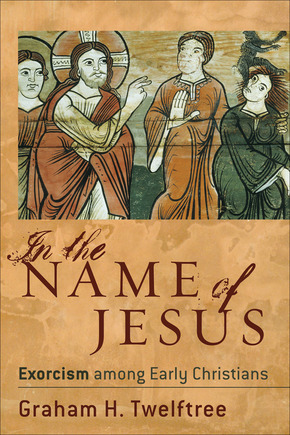 "A meticulously detailed exegetical study on exorcism in the early church. . . . It is undoubtedly the best academic work on the subject. I highly recommend this book to those who wish to delve deeper into the issue of exorcism to understand its nature and place in the church--then and now."--Cornelis Bennema, Journal of the Evangelical Theological Society

Although the Synoptic Gospels treat exorcism as a significant aspect of Jesus's ministry, other parts of the New Testament (e.g., John and Paul) say little to nothing about exorcism. Which is more reflective of early Christian belief and practice? The answer to that question has relevance both for biblical scholars and for the contemporary church.

Graham Twelftree explores this debated issue by examining exorcism in the New Testament world before embarking on a chronological study of all relevant New Testament passages. He supplements his New Testament exploration with an analysis of how second-century Christians and critics viewed exorcism.

This comprehensive study yields a nuanced view of the early Christian church and its view of Jesus as a model for ministry.

"Graham Twelftree has proved himself, by several top-level monographs, as the expert of the day in his cautious, meticulously detailed examination of Jesus as an exorcist and miracle worker. He now judiciously extends the examination to the early church's view and practice of exorcism from Paul through to the Greek Apostolic Fathers. There is no better, nor even comparable, treatment. This will dominate a generation of study."--Max Turner, professor of New Testament studies, London School of Theology

"In this excellent book, Graham Twelftree describes the place and practice of exorcism among the early Christians. He discusses Jesus as an exorcist, the way exorcism does or does not feature in the various strands of the New Testament, and exorcism in the second century in both Christian texts and those of their critics. His balanced and insightful scholarship will be of immense value to scholars and students alike. This book will make a major contribution to this important but comparatively neglected area of study."--Paul Trebilco, professor of New Testament studies, University of Otago

"Contemporary accounts of exorcisms abound but there has been very little written on the practice from a rigorous biblical and historical perspective until now. In the Name of Jesus fills this gap and provides the reader with numerous helpful insights into the text of Scripture and into the practice of the church in the second century. This book is exceptionally well researched and will prove to be an indispensable source for biblical scholars as well as anyone interested in the theme of spiritual warfare. I cannot think of anyone better suited to write this volume than Dr. Twelftree."--Clinton E. Arnold, professor and chairman, department of New Testament, Talbot School of Theology

"For over two decades Graham Twelftree has closely studied the question of exorcism. This stimulating and graciously provocative work is essential reading for anyone working in the field."--Rikk Watts, associate professor of New Testament, Regent College

"[A] thorough and reasoned study of the biblical evidence relating to exorcism, including several critical voices of the practice from the second century. . . . Although the text seems centered on the reality of evil and the demonic, truth and divine grace are the real theme of this meticulously researched, carefully written, and pastorally sensitive theological work. Recommended for theological collections."--John-Leonard Berg, Library Journal

"A thorough, lucid survey of exorcism in the early church up to A.D. 200. . . . Those curious about the early Church's view and practice of exorcism will do well to consult Twelftree's book."--Nathaniel Peters, First Things

"[This book] will be of interest to biblical scholars and students as well as anyone interested in the theme of spiritual warfare."--Ecumenism

"This book provides ample evidence of scholarly research. The clarity of thought makes this study highly readable for theological students, while the meticulous notes, index and bibliography will undoubtedly be appreciated by the serious researcher. In the Name of Jesus will be an invaluable tool for the study of the demonic in the New Testament in particular and for the study of early Christianity in general."--Mark Jason, Scottish Bulletin of Evangelical Theology

"Twelftree reinforces his reputation for studies on exorcism in early Christianity. . . . Conscientious reflection and carefully-drawn conclusions reflect personal and academic integrity. This work addresses a time and topic in church history that has needed attention. Interest in the history of Christian exorcism will benefit greatly from this significant foundational contribution."--Mark W. Anderson, Evangelical Missions Quarterly

"This excellent study . . . helps to anchor the Christian phenomenon of exorcism within the wider cultural milieu of the first and second centuries."--Paul Foster, Expository Times

"A meticulously detailed exegetical study on exorcism in the early church. . . . [It] concludes with a select bibliography and helpful indexes on ancient writings, authors, and subjects. . . . The major strength of the book is the inclusion of literature from the second century, whereby Twelftree is able to demonstrate that the function of Jesus in early Christianity was much more varied than we might conclude from the NT. I was also impressed at the breadth, depth, and rigor of Twelftree's research. . . . Twelftree's case for the place and practice of exorcism among early Christians is convincing overall and a must-read for anyone interested in the subject. . . . It is undoubtedly the best academic work on the subject. I highly recommend this book to those who wish to delve deeper into the issue of exorcism to understand its nature and place in the church--then and now."--Cornelis Bennema, Journal of the Evangelical Theological Society

"A thorough study of Christian healing practices during the first two centuries, based on the New Testament and early post-biblical literature."--International Review of Biblical Studies

"The world's leading expert in the subject of exorcism in the Jesus tradition has now turned to exorcism in the early church. . . . This volume is as detailed and as apparently exhaustive as Twelftree's work on the Jesus tradition. . . . [Twelftree] has given [first and second century Christian exorcism] a sort of top-down treatment that it has not had in an English work until now. . . . He provides an extremely thorough discussion of the details of the text, together with thorough discussion of past scholarship, although the latter is never allowed to control the discussion too much. In spite of the depth of his analysis, Twelftree does not allow the reader to get too bogged down. If a book can be said to have a pace, this one seems to have a spring in its step. I heartily recommend this book for anyone with an interest in the topic of exorcism."--John Poirier, Pneuma Review

"Ancient beliefs and practices regarding exorcism present significant challenges for New Testament interpreters, not least because, in addition to the task of assessing the significance of exorcism in antiquity, one must also ask how it might be understood today. Professor Twelftree has been a longstanding contributor to both of these discussions. . . . This book, his third concerned with exorcism, is a lucid and above all accessible addition to this corpus. . . . [Twelftree's] principal aim is to provide a degree of clarity in a scholarly debate that is divided between those who accord exorcism a place of centrality in early Christian evangelism and those who do not. . . . The picture he paints is one in which exorcistic practices have varying fortunes in the first two centuries of the Church, and in so far as this is carefully argued and warranted, his project can be judged a success."--Michael J. Lakey, Theology

"Twelftree is no stranger to the topic he investigates thoroughly in this [study]. . . . Solid scholarship, with pastoral sensitivity, I recommend this book for students and teachers of New Testament and early Christian studies."--Maxwell E. Johnson, Journal of Ecclesiastical History

"This detailed study builds upon [Twelftree's] previous work. Here his wish to examine the early church in more detail than he previously accomplished is realized. Moreover, his desire to focus more carefully upon Paul's letters and Johannine Christianity is also achieved. For an answer to 'the Johannine silence on exorcism' Twelftree's arguments make engaging reading. In places (e.g., Paul) he helpfully highlights where his own views have changed. This careful study makes a considerable contribution to our understanding of exorcism."--Robert S. Dutch, Journal for the Study of the New Testament

"Did the early Christians follow the example of Jesus and practice exorcism? And if they did, how did they practice it? These are the principal questions that Graham Twelftree takes up in this important and informative volume. There is no one better qualified to address this question than Twelftree, who has researched various facets of this topic. . . . The historical treatment is precisely what makes this book a rich and helpful contribution. No one else has covered the same territory to the depth that Twelftree does in this volume. . . . We are greatly indebted to Twelftree for his careful historical work on this important and neglected topic. . . . This volume needs to be read not only by biblical scholars, but those involved in the ministry of the church."--Clinton E. Arnold, Evangelical Quarterly

"A very well-researched monograph by one who has made the study of exorcism in early Christianity a lifetime project. It is a book that deserves to be a reference for anyone interested in Christian origins in general and in the broad spectrum of views and practices of exorcism among the early Christians in particular."--Ronald Charles, Toronto Journal of Theology

"Scholars will be indebted to Twelftree for his career-long interest in, research on, and publications about this topic. His meticulous studies include revisions of previously published opinions and thereby provide up-to-date, rich overviews of possession, exorcism, and related topics."--John J. Pilch, Catholic Biblical Quarterly

"This historical study by Twelftree [is] informed by decades of research and reflection on the subject of exorcism in the Jesus traditions and early Christianity. . . . Twelftree's focus on the formative literature of the first two centuries enriches our understanding of early Christian attitudes toward exorcism. Cutting across disciplines, it will likely find a wide audience and will benefit student and specialist alike."--Clinton Wahlen, Pneuma

"With its narrow focus on exorcism in the first and second centuries CE this necessary work fills a lacuna in New Testament scholarship and further establishes the author's reputation as the premier scholar on the subject. . . . [A] fascinating study. . . . Twelftree's work is marked by cautious exegesis and plausible reconstruction, and he is forthright when entering into conjecture and refreshingly unpretentious in his willingness to revise previously held positions. In the Name of Jesus ought to be read by everyone interested in the subject of exorcism in the New Testament and early Christianity."--Daniel Frayer-Griggs, Journal for the Study of the Historical Jesus