I Suffer Not a Woman

Rethinking I Timothy 2:11–15 in Light of Ancient Evidence 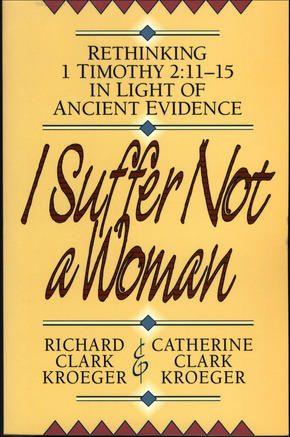 "A fascinating study. . . . It will now become impossible to interpret legitimately the Pauline prohibition without recourse to this valuable resource."--Gilbert Bilezikian, Wheaton College

I suffer not a woman to teach, nor to usurp authority over the man, but to be in silence.

This passage troubles those who desire greater leadership roles for women in ministry but who also want to remain loyal to Scripture. Did Paul forbid a woman to exercise her leadership and teaching gifts, or was he dealing with a particular error in the church?

According to I Suffer Not a Woman, Paul was reacting to a specific problem that was sweeping churches: a myth, taught mostly by women, which later became a foundation for gnosticism. This book offers an in-depth look at the Greek text of 1 Timothy 2:11-15 in the context of the Pastoral Epistles and in its historical context. By illuminating the first-century culture of Ephesus, the Kroegers shed light on the ancient world thought patterns Paul faced and offer a responsible alternative understanding of this much debated passage.

I Suffer Not a Woman is well documented yet easily accessible. Illustrations and photographs provide a fascinating look at the ancient world. It was previously published by Baker in 1992.

"Working from a wide range of primary sources, I Suffer Not a Woman draws the reader into ancient-world thought patterns. The authors provide a compelling case for interpreting the text in 1 Timothy as a refutation of false teaching, rather than as a narrow restriction on women's role. . . . This book must be taken seriously and deserves a wide audience."