A New Way to Share Christ with Latter-day Saints 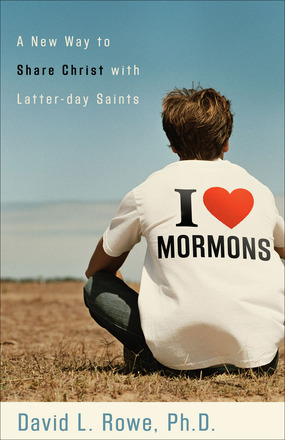 How can Christians speak the Good News to Mormons so that it really sounds like good news?

Wrestling with this and other questions has led Salt Lake City resident David Rowe to a new way of sharing Christ with Latter-day Saints. "Mormons are three-dimensional human beings with their own culture, lingo, and worldview," Rowe explains. In evangelism, our words will be more effective if we start by learning and respecting LDS culture. Rowe's keen insights, helpful illustrations, and practical discussion questions will help readers to build bridges to Mormon friends and neighbors.

"For the past thirteen years, I have developed wonderful friendships with a small group of religion professors at Brigham Young University, all members of the Church of Jesus Christ of Latter-day Saints in good standing. Through extensive conversations I have learned firsthand what they actually believe and teach, what directions the church is heading in the twenty-first century, and how evangelical Christians are generally perceived in LDS circles. When people have asked me for the best resource available for how best to interact with LDS friends today with respect to religious topics, I have told them "the Bridges video series, produced by Salt Lake Seminary." Now similar material is even more accessible in this book. A must read for all who care about this topic."--Craig L. Blomberg, distinguished professor of New Testament, Denver Seminary

"Dave Rowe not only loves Mormons, he understands that an essential requirement of love is truth-telling. He writes candidly about the appeal and burdens of Mormonism, the differences between it and historic Christianity, and our often counter-productive attempts to share our faith with Latter-day Saints. This book should be required reading for all who know Mormons, or will soon know Mormons--which is to say, almost everyone. It is written with clarity, practicality, and most of all charity."--Donald McCullough, president, Salt Lake Theological Seminary

"This is a highly commendable example of the apostle Paul's directive to Timothy, his fellow missionary. In his enlightening discussion of how to witness effectively to Mormons, Dr. Rowe exhibits not only keen logic and detailed knowledge but an irenic spirit and gracious attitude. Here we have missionary apologetics at its best."--Vernon Grounds, chancellor, Denver Seminary

"Something is wrong with witness when one consistently wins arguments but never souls. The habits of the Mormon heart are not reshaped by confrontation with the gospel but by confession of the gospel. David Rowe teaches us lessons in faithful confession to Mormon culture. Live these lessons, and the lives of those around you will turn Godward."--Terry C. Muck, professor of mission and world religion, Asbury Theological Seminary

"For over a century and a half evangelicals have written books condemning Mormon belief and practice. Not surprisingly, these books engendered a style of evangelism focused on winning arguments, not people. Dave Rowe has written a new kind of book-one that endeavors to make the Good News actually sound like good news to Mormons. His three decades of ministry in Utah has given him insights into Mormon culture and the Mormon mindset that are a tremendous help to those who want to reach their Mormon friends."--Ken Mulholland, founder and former president, Salt Lake Theological Seminary

"What a fresh, creative approach to sharing the gospel with those of the Latter-day Saints faith! In his delightful narrative style, David encourages the reader to accompany him in his own journey in coming to understand how to relate to Mormons. He demonstrates a key understanding of Mormonism: it is not just another religion, another cult, but a culture. He does this without any compromise to the teachings of historic Christianity, but displays a genuine love and respect for them. From my own experience of pastoring a church in Utah for 20 years, I can't emphasize strongly enough that this is such an important concept to grasp if one is to be effective in relating to them. The questions at the end of each chapter are a great help toward applying these principles to our own situation."--Les Magee, former pastor of Washington Heights Church, Salt Lake City

"I have been a serious student of the Mormon Church and Mormon culture for 45 years. I grew up in the state of Utah and I ministered as a pastor in Utah for 33 years. I have read dozens of books over the years about Mormon history, Mormon theology, beliefs, and practices, and how to witness to or share the gospel with Mormon people. This is the best book I have read on understanding Mormon culture and communicating effectively with Mormon people. David Rowe writes out of decades of experience of living in Utah and interacting with Mormon people. This is not a theoretical treatise, but rather a practical and compassionate approach to living constructively as a Protestant Christian in a setting dominated by Mormon culture."--Jeff Silliman, executive presbyter, Presbytery of Riverside, San Bernadino, California

"Mormonism is an experiential religion. People who want to argue with Mormons about the teachings and the texts of their religion may seriously miss the opportunity to communicate. David Rowe helps readers understand how Mormonism functions as a culture, a way of life, and even as a catalyst for burning-in-the-bosom moments of personal transcendence. Following Rowe's insights can help readers create points of deep personal contact with Mormons-and the potential for transformation."--David Neff, editor and vice president, Christianity Today

"I Love Mormons offers a wealth of information about the origins of Mormonism, and more importantly, how to use that information to build bridges and thus gain an audience with Latter-day Saints. It's a must-read for anyone with a heart for the lost and the desire to be a 'more approachable representative of Christ.'"--Keir MacMillan, Christian Music Planet

"Overall, Rowe's message for interacting with everyday Mormons is needed, the anecdotes are clear, and the wealth of experience that Rowe and his colleagues have gained is a treasure that we can freely dip into and learn from."-- M. J. Wooten, Christian Book Previews.com

"I Love Mormons is an incredibly helpful and insightful book when it comes to relating to Mormons within their cultural framework."--Countercult Apologetics Journal

"A Christian guide to Mormonism, wrapped in love. Taking the view that Mormonism is a culture to study and understand, Rowe brings a fresh and unintimidating approach to a typically ignored outreach population."--Outreach magazine, 2005 Best Outreach Resource Finalist