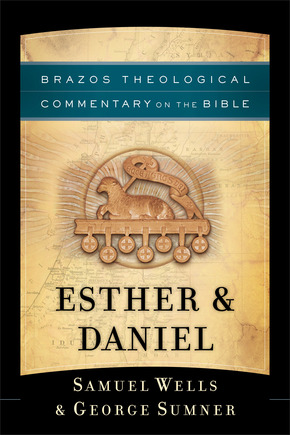 The Brazos Theological Commentary on the Bible advances the assumption that the Nicene creedal tradition, in all its diversity, provides the proper basis for the interpretation of the Bible as Christian scripture. The series volumes, written by leading theologians, encourage readers to extend the vital roots of the ancient Christian tradition to our day. This addition to the well-received series offers a theological exegesis of Esther and Daniel.

Volumes in the Brazos Theological Commentary on the Bible

"A fascinating conversation between two books that capture opposite aspects of the life of faith emerges in this volume of the Brazos Theological Commentary. In Esther, God seems to disappear from history, leaving the faithful to their own desperate devices. And in Daniel we read about God breaking into the chaos of history. Imaginatively and convincingly, Wells and Sumner show the theological, ethical, and even missional importance of these 'outlier' books within the Christian canon. Powerfully written, this book is designed to stimulate serious conversation in the church."

"This volume in the Brazos Theological Commentary series shows two keen theological imaginations interacting with two challenging books of the Bible. Wells and Sumner offer readings of Esther and Daniel that display their insights as careful, thoughtful readers, while also revealing their roles as contemporary tradents passing on insights from their historic predecessors to their contemporary community. Preachers, students, and scholars who care about the possibility of responsible theological interpretation--especially with regard to the relation of Jewish and Christian readings of biblical books--will find much of great value here."

"Here is a form of biblical interpretation the church should never have forgotten. Wells and Sumner read not uncritically, not even postcritically, but with a form of criticism born of cross and resurrection. And just so, they remind us how beautiful are the books of Esther and Daniel."

Praise for the Brazos Theological Commentary on the Bible:

"What a splendid idea! Many preachers have been longing for more commentaries that are not only exegetical but theological in the best sense: arising out of the conviction that God, through his Word, still speaks in our time. For those of us who take our copies of Martin Luther's Galatians and Karl Barth's Romans from the shelves on a regular basis, this new series in that tradition promises renewed vigor for preaching, and therefore for the one, holy, catholic, and apostolic church in our time."

Fleming Rutledge, author of The Bible and The New York Times and The Seven Last Words from the Cross

"This new series places the accent on 'theological' and reflects current interpretive ferment marked by growing resistance to the historical-critical project. It may be that scripture interpretation is too important to be left to the exegetes, and so a return to the theologians. We will wait with great anticipation for this new series, at least aware that the outcomes of interpretation are largely determined by the questions asked. It is never too late to ask better questions; with a focus on the theological tradition, this series holds the promise of asking interpretive questions that are deeply grounded in the primal claims of faith. The rich promise of the series is indicated by the stature and erudition of the commentators. Brazos has enormous promises to keep with this project, and we wait with eagerness for its appearing!"

"The Brazos Theological Commentary on the Bible makes a most welcome contribution to the church, the academic world, and the general public at large. By enlisting a wide range of Protestant, Catholic, and Orthodox theologians who differ on much, but who agree on the truth of the Nicene Creed, the series also represents ecumenical activity of the very best kind. It is always a daunting challenge to expound the church's sacred book both simply and deeply, but this impressive line-up of authors is very well situated for the attempt."

"Contemporary application of the Bible to life is the preacher's business. But no worthy contemporary application is possible without a thorough understanding of the ancient text. The Brazos Theological Commentary exists to provide an accessible authority so that the preacher's application will be a ready bandage for all the hurts of life. We who serve the pulpit want a commentary we can understand, and those who hear us expect us to give them a usable word. The Brazos Commentary offers just the right level of light to make illuminating the word the joy it was meant to be."

Calvin Miller, author of A Hunger for the Holy and Loving God Up Close

"Preachers and teachers in particular, but thoughtful Christians more generally, have long lamented the slide of biblical scholarship into hyper-specialized critical studies of ancient texts in remote historical context. It is no wonder, therefore, that the Brazos Theological Commentary is being so warmly welcomed. The outstanding array of authors, beginning with Jaroslav Pelikan's splendid commentary on the Acts of the Apostles, are, at long last, reclaiming the Bible as the book of the living community of faith that is the church."

"For pastors, wanting to get at the theological heart of a text, there is some good stuff. When I am preaching, I usually try to take a peek at the Brazos volume."

"The interdisciplinary character of this commentary series is reflected in this volume, written by an Anglican vicar and a missiologist. . . . Since both writers are well-established theologians, their interpretive skills are well honed. Their pastoral experience can be seen in their manner of expression. The book is faithful to the theological focus of the series."

"A theological commentary such as this is helpful. Scholars for this series are selected because of their support for and interacting ability with 'Christian doctrinal tradition.' The two authors of this volume are well qualified in this regard. . . . The nature of this volume lends itself to be appreciated from a literary perspective. . . . [It] exhibit[s] a thoughtful sensitivity that stimulates appreciation for the biblical books of Esther and Daniel and rightly affirms their place as a fixture in the landscape of God's redemptive work."

"The Brazos Theological Commentary series is to be praised for attempting to take seriously the call for sound theological exegesis in light of the confessions of the church historic. . . . This volume has much to commend it with regard to this foray into commenting upon Scripture. . . . Both Wells and Sumner have offered refreshing purviews of theological commentary on each of their respective books. . . . They have each left their own imprint--Wells via a dramatic rendition, Sumner by a missional apocalyptic proposal. Their respective theological interpretations are well-guided by the text of Scripture, and by later reflections and appropriations by various communities and commentaries, though these interpretations are expectantly brief and limited in scope."

"This volume is a welcome addition to the Brazos Theological Commentary on the Bible series. This series lies somewhere between exegesis and exposition. As the title suggests the theological issues are to the fore and this provides a fresh approach. Samuel Wells . . . takes a narrative view of Esther. . . . This is no dry and dusty tome. He brilliantly opens up Esther and shows the book to be both far fetched and existentially urgent. . . . George Sumner . . . takes a 'circulatory system' approach, where a major artery runs directly from Daniel to Revelation and he rightly interprets the two books in relation. Sumner does not suffer from chronological snobbery and he freely uses Calvin, Jerome, Melanchthon and others to help make sense of the text. . . . The strength is that Wells provides a dramatic setting to Esther and Sumner brings missional insights to the understanding of Daniel. Both authors take seriously the Christological and canonical settings of the books. . . . This series is certainly one worth considering when buying a new commentary."