The Poor, Christian Mission, and Our Hyperconnected World 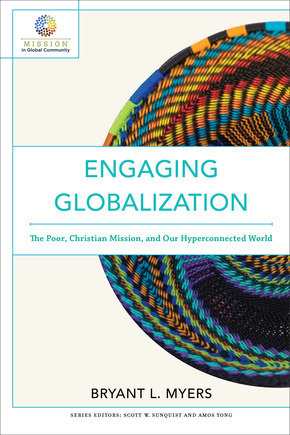 This perceptive analysis by a veteran leader in global development work orients readers to the history of globalization and to a Christian theological perspective on it, explores concrete realities by focusing on global poverty, and helps readers reimagine Christian mission in ways that announce the truly good news of Christ and God's kingdom. Diagrams and sidebars that incorporate the voices of global partners are included.

About the Series
This is the second book in the Mission in Global Community series, which reframes missiological themes and studies for students under the common rubric of mission as partnership with Christians throughout the global community. Series authors draw upon their own global experiences and those of their global colleagues to illumine present realities and chart a course into the future. Series editors are Scott W. Sunquist, president of Gordon-Conwell and former dean of the School of Intercultural Studies at Fuller Theological Seminary, and Amos Yong, director of the Center for Missiological Research and professor of theology and mission at Fuller Theological Seminary.

"Engaging Globalization delves into the complex forces of globalization that shape our contemporary world. At the heart of the book is a long-standing concern for God's shalom, continuing the important work Myers helped inform with his earlier volume, Walking with the Poor. What is more, Myers does so as a missiologist, which perhaps more than anything else makes this book so critical, as he flips globalization on its head and asks us to think about how we should witness to such forces with the gospel of Jesus Christ. As we have come to expect, Myers delivers a book that is as astute as it is compelling."

"Unfortunately, false information and lack of education has resulted in significant confusion and fear around the topic of globalization. Christian leaders, teachers, and ministers have a responsibility to provide accurate historical, biblical, and theological reflections on globalization rather than regurgitating uninformed, biased media reports. In this essential text, Bryant Myers offers a vision of human flourishing that emerges from careful study and thoughtful pastoral reflection. Myers presents a balanced work that should be read by any who seek to guide the church in key areas of Christian thought and life."

Soong-Chan Rah, Milton B. Engebretson Professor of Church Growth and Evangelism, North Park Theological Seminary; author of The Next Evangelicalism and coauthor of Return to Justice

"God wants our hearts and heads, our hands and feet, to partner in transforming a messy and complex world. Loving God and loving neighbor in our age of globalization requires new dimensions of discipleship, attentive discernment, and intentional spiritual formation. Myers shares a compelling vision for how ordinary laity, church leaders, and people of goodwill are called to partake in God's work of restoration and redemption. Engaging Globalization is a must read for anyone who desires to be transformed and to change the world."

Krisanne Vaillancourt Murphy, coauthor of Advocating for Justice: An Evangelical Vision for Transforming Systems and Structures

"After more than half a century of usage, the term globalization is experiencing a crisis of meaning and significance. Yet, its pervasive use in public discourse and the incessant debate about its benefits and detriments point to the centrality of the concept for making sense of the most transformative changes taking place in our world. For people of faith, the concept poses daunting questions; perhaps especially for the global Christian family, since the Christian movement is both impacted by and deeply implicated in the processes of globalization. But Christian perspectives or responses tend to narrowly focus on one dimension or the other. In Engaging Globalization, Bryant Myers provides a comprehensive and astute appraisal of globalization that combines wide-ranging scholarly analysis with unabashed theological scrutiny and a deeply pastoral outlook. The complexities of globalization (understood as 'a deeply embedded historical process') are carefully navigated; entrenched myths regarding its value, promise, and outcome are interrogated; and the ambiguities, not to mention unresolved dilemmas, of its myriad processes are laid bare. A sharp focus on how globalization shapes the human story also allows Myers to probe issues of great import for the church and its mission, including ecological change, migration, human flourishing, economic justice, faith and development, global compassion, and the use of power. This engaging exploration of what it means to be the church in a new global age is both timely and instructive."

"For Christians desiring to engage the joys and trials of globalization with inspired, faith-centered, and effective responses, Myers marks the path. Insisting on the essential connection between a deep spiritual relationship with God and commitment to justice in the world, Engaging Globalization calls Christians everywhere to the redemptive task of appreciating the good of secular theories and practices of globalization, while at the same time revising and reforming these theories and practices with our deep awareness of God, our image-bearing humanity, and the purpose God has given us. For a world that is both in thrall to and threatened by the secularizing forces of globalization, this is a message we desperately need."

"Globalization is a complicated topic. Myers makes dense concepts relatively accessible to his readers and provides theological lenses through which to see the issues at stake. . . . Myers takes a clear-eyed view of globalizing processes, seeing both the good and the evil they bring. One of the most helpful lessons Myers provides is on the role individual humans might play in a globalized society, and how we should not lose sight of an all-powerful God, who is over, above, and in the midst of globalization, even as globalization is part of our fallen creation and is not likely to last forever."