The 7 Principles That Shaped His Life and Will Change Yours 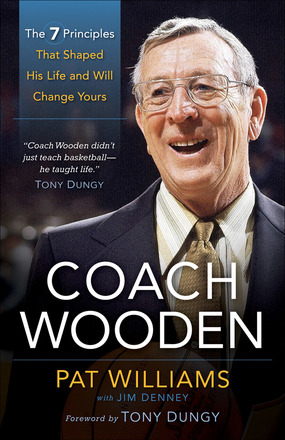 When Coach John Wooden graduated from eighth grade his father gave him a handwritten card and said, "Son, try to live up to this." On the card, his father had written seven simple yet profound life principles:


Be true to yourself
Help others
Make friendship a fine art
Drink deeply from good books, especially the Bible
Make each day your masterpiece
Build a shelter against a rainy day by the life you live
Give thanks for your blessings and pray for guidance every day


These principles were the key to Coach Wooden's greatness--and his goodness. Through powerful stories and pithy advice, this book shares the wisdom that made Wooden happy and successful. This inspirational and conversational book will encourage, challenge, and motivate readers to build these principles into their own lives.

"I urge you to read this pertinent book--and in Coach Wooden's words, 'discipline yourself so no one else has to.'"--Joe Maddon, Tampa Bay Rays manager

"I only spent three years at UCLA while Coach Wooden was still coaching, but I received a lifetime of positive influence from being around him. I leaned on what I learned from him many times throughout my career. Being able now to pick up Pat Williams's new book, Coach Wooden, and refresh my memories of the all the conversations I had with Coach Wooden is very stimulating to me. I'm positive that you will find this wonderful book as valuable and powerful as I have. Thank you, Pat Williams!"--Dick Vermeil, former Philadelphia Eagles, St. Louis Rams, and Kansas City Chiefs head coach

"John Wooden has had more influence on my coaching career than any other person. I have always admired the fact that John could tell you not only what he did as a coach but also why he did it and why it was important to do it that way, better than any other coach I have known. He will be remembered for his tremendous coaching accomplishments on the court but even more for his faith, his character, and the influence that he had on so many other lives. I highly recommend Pat Williams's book."--Tom Osborne, University of Nebraska athletic director

"This book is about the early years of the greatest basketball coach who ever lived. John Wooden not only taught his players about basketball, he taught them how to live and appreciate life. He was a hero not just to basketball fans but to everybody. I respected John Wooden as a great coach but more importantly as a great man."--Tommy Lasorda, former Los Angeles Dodgers Hall-of-Fame manager

"We can never agree on who was the greatest player or coach in any sport, except for basketball. It's Coach Wooden, hands down. Even better, he was the best of all the great ones off the court. He had no equal, as you'll learn in this fascinating new book by his friend, Pat Williams."--Jim Boeheim, Syracuse University head basketball coach

"Coach Wooden had retired from coaching before I was born, yet he is one of the coaches whom I have most admired and studied. He left a long-lasting mark, not only on the game but on all of us striving to be better leaders. This book will explain how he did it."--Brad Stevens, Butler University head basketball coach

"Coach Wooden has had a positive effect on my life, and after reading this book you will thank Pat Williams for keeping alive his philosophy and success principles."--Lou Holtz, former Notre Dame University and University of South Carolina head football coach

"Coach Wooden's coaching philosophy has played a major role in my basketball career. Now you can learn about the foundation of his life in this important book by Pat Williams. Drop everything you're doing and start reading."--Mike Krzyzewski, Duke University head basketball coach

"Pat Williams has done a great job in capturing the essence of John Wooden--both the coach and the man. I enjoyed this book and you will too."--Sparky Anderson, former Detroit Tigers Hall-of-Fame manager

"Pat Williams has spent a lifetime studying the success principles of his friend John Wooden. This new book is loaded with Wooden wisdom that will deeply impact all of us."--Bill Parcells, Miami Dolphins executive vice president of football operations

"I have read a lot of Coach Wooden's work, and it just makes too much sense not to implement many of the principles that he has taught while he was coaching and during his retirement. This book may be the best of all."--Mark Richt, University of Georgia head football coach

"I had an enormous admiration for Coach Wooden and his coaching philosophy. This book adds great depth to the legend of Coach. You will enjoy it immensely."--George Karl, Denver Nuggets head coach

"John Wooden represented all the good qualities coaches are always teaching their young athletes. Coach Wooden was a master of getting people to perform at their maximum. This text will define why he was the greatest leader ever to grace the sidelines."--Dick Vitale, ESPN college basketball analyst

"I have known both Pat Williams and Coach Wooden for a number of years. No one could tell the story of the greatest coach of all time better than Pat."--Jim Calhoun, University of Connecticut head basketball coach