Christianity at the Religious Roundtable

Evangelicalism in Conversation with Hinduism, Buddhism, and Islam 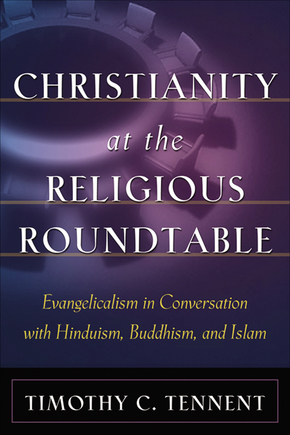 "A helpful book for evangelicals because it enters into dialogue with concrete beliefs of other religions. . . . This is a welcome addition to the literature and hopefully will be widely read by undergraduates."--John Sanders, Religious Studies Review

Can evangelicals learn from world religions? While evangelicals have extensive experience with other religions through missionary endeavors, in today's postmodern, pluralistic context, the nature of this experience is changing. Christ's uniqueness and the truth of the gospel are uncompromisable, but in our contemporary setting Christianity is faced with a different apologetic task than in ages past. Rather than being at the head of the table, Christianity now finds itself at a roundtable, dialoguing with competing faiths.

Keenly aware of these shifts, Timothy Tennent offers Christianity at the Religious Roundtable. This book offers a focused treatment that engages doctrinal challenges to Christianity from Hinduism, Buddhism, and Islam. Students of world religions and missions will appreciate Tennent's attempt to stimulate serious dialogue with competing world faiths.

"Drawing upon extensive intercultural and interreligious ministry experience as well as solid work in theology and comparative religions, Professor Tim Tennent has produced an important work that should take evangelical discussions about theology of religions to a new level. Tennent displays a refreshing blend of respect for and willingness to learn from other traditions along with a firm commitment to the gospel of Jesus Christ as truth for all people."-Harold Netland, Trinity Evangelical Divinity School

"A vigorous, clearly-written invitation to committed Christians to enter the thought-worlds of other people. With an approach interestingly modeled on Luther's Table Talk, Tennent brings great but frequently neglected experimental thinkers of the past, such as Brahmabandhav Upadhyay and A. G. Hogg, to a roundtable discussion on issues very much up-to-date."-Andrew Walls, University of Edinburgh

"An invaluable resource, meticulously researched. This book gets to the heart and mind of these major religions and responds with brilliant insight for effective dialogue."-Ravi Zacharias, president, Ravi Zacharias International Ministries

"The narrative is clear, and complex issues are generally understandable to a reasonably well-informed reader. . . . Tennent possesses in-depth knowledge of the faiths he presents in his discussion. . . . [He] demonstrates a depth of research into the complexities of the religious world that is found in altogether too few evangelicals. We await his next work with genuine anticipation since we believe he shows the marks of one who could play a leading role in authentic evangelical interreligious dialogue."--James F. Lewis, Dharma Deepika

"Out of his numerous dialogues with people of other faiths, Tennent breaks new ground for evangelicals by addressing specific comparisons between his form of evangelical Christianity and particular representatives of these religions. . . . This is a helpful book for evangelicals because it enters into dialogue with concrete beliefs of other religions. Tennent addresses excellent questions to his fellow evangelicals. . . . This is a welcome addition to the literature and hopefully will be widely read by undergraduates."--John Sanders, Religious Studies Review

"Students of world religions and missions will greatly benefit from this text. Tennent's respectful and yet critical approach to interreligious dialogue sets an example for the evangelical Christian community that will take mission endeavors to a new and exciting level. His invitation to make ourselves vulnerable is pertinent to the Great Commission."-Renate Viveen Hood, Christian Ethics Today

"[Timothy C. Tennent] is an engaged exclusivist, committed to the historic Christian faith and engaged in communicating the gospel with those of other belief systems. Evangelical Christians will be pleased to find a clear statement of the gospel along with a charitable approach to the followers of other faiths. The beliefs of Buddhist, Hindu and Islamic respondents are expressed clearly and kindly in this excellent book. . . . Christianity at the Religious Roundtable is relevant in the present pluralistic context of North America and Europe as well as in the non-Western world where the majority of today's Christians are located, and is highly recommended."--Roger E. Hedlund, Evangelical Missions Quarterly

"Tennent . . . has moved evangelical theology of religions a step forward with this book. Unlike most evangelical interpreters heretofore, Tennent shows sophisticated knowledge of other traditions and thinks 'we can benefit' from our dialogue with them. . . . The result is a well-written series of acute philosophical exchanges that both recognize truths in other traditions and lend new apologetic insight. . . . This book, then, marks an important milestone in evangelical theology of the religions: it provides a model for disputation in which careful attention is paid to other religious texts, but it also points out the need for more evangelical work on revelation and the meaning of interreligious encounter."--Gerald R. McDermott, The Edinburgh Review of Theology and Religion

"Tennent has provided readers with a gift: a compact, well-researched, understandably-presented defense of historic Christianity through the vehicle of roundtable discussion. The crucial doctrines of faith are unpacked in a thorough, technical, yet intelligible manner. The discussions do not host superficial caricatures of representatives of the included non-Christian religions, but rather, convicted, articulate followers who are well-learned in their respective faiths. This allows for fascinating, refreshing dialogues that draw the reader in, wanting to know more about the respective religions, join in the dialogues and also, perhaps, consider his or her own convictions about what he or she believes concerning these important doctrines and then, or in conjunction with, be inspired to connect with those in other faiths in roundtable-like discussions as devoted Christian ambassadors."--David C. Walther, Journal of Psychology and Christianity

"Tennent's genius lies in his ability to creatively present both sides of the dialogue in a compelling and immensely nuanced understanding of the three major religions. He provides a helpful introduction to the theme and then proceeds to develop a reproduction of exchanges between protagonists from each religion. . . . The format and the rich content of the book make this a valuable resource for advanced scholars of religion. However, the clarity of expression, and the helpful glossary of terms make this an equally important work for beginning students as well. It would make an excellent text or supplementary reading for course in comparative religion. Furthermore, as the epilogue makes plain the book is an excellent primer for evangelicals."--Daniel D. Scott, Canadian Evangelical Review

"This book provides a wealth of background material that will help cross-cultural communicators better understand the followers of Hinduism, Buddhism, and Islam. . . . The author's presentation of the various issues throughout this important volume is superb."--Brian Fargher, International Bulletin of Missionary Research