The Charleston Church Shooting, a Victim’s Husband, and the Path to Healing and Peace

by: Anthony B. Thompson, Denise George 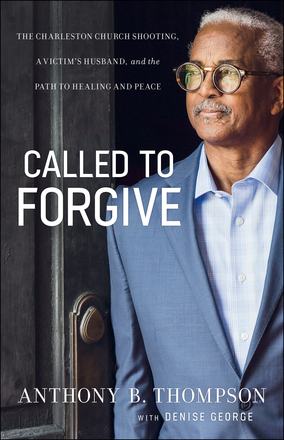 Witness the Power of Forgiveness through the Charleston Church Shooting

On June 17, 2015, Dylann Roof, a young white man, attended the Wednesday evening Bible study at the predominantly black Emanuel AME Church in Charleston, South Carolina. An hour later, Roof pulled a concealed weapon and killed nine African-Americans as they prayed, including Myra Thompson, the wife of Reverend Anthony Thompson. Myra's murder devastated Anthony, yet he chose to privately and publicly forgive the shooter.

Many in the church and community still struggle to understand Reverend Thompson's deliberate choice to forgive the racist murderer. But as Charlestonians witnessed this incredible act of forgiveness, something significant happened within the community. Instead of the expected racial riots in the aftermath of the shooting, black and white leaders and residents united, coming together peaceably and even showing acts of selfless love.

This book is the account of Reverend Thompson's wife's murder, the grief he experienced, and the radical choice to forgive the killer. But beyond that, Reverend Thompson casts a compelling vision of the power of forgiveness to transform our lives--personally, in our communities, and even in our nation.
Be inspired by this remarkable story and discover how the difficult decision to forgive can become the key to radical change.

The Reverend Anthony Batiste Thompson is the pastor of Holy Trinity Reformed Episcopal Church of Charleston. The Reverend Thompson was married to the late Myra Thompson. They have three children and six grandchildren.

Denise George is the author/coauthor of thirty-one books. She is married to Dr. Timothy George. They have two grown children and one toddler grandson. George has served as founding director of LifeWay's Women's Ministry program and adjunct instructor at Beeson Divinity School.

"Pastor Anthony Thompson's wife, Myra, was brutally murdered at Emanuel AME Church in Charleston along with eight others on June 17, 2015. The nation was shocked by this racially motivated hate crime. No one could have anticipated what would happen next. Pastor Thompson stood in front of the killer, forgave him, and then offered him the hope of the gospel in Jesus Christ. That moment, broadcast worldwide, inspired the entire city to act on grace rather than revenge and hatred. Called to Forgive offers the backstory, the heart-wrenching story, while celebrating and challenging the reader to experience the greatest force known to humanity, God's grace. As his colleague and friend, I commend Pastor Thompson to you. Every word written herein is authenticated by his life. If you long to understand forgiveness, meet Anthony Thompson."

"Anthony Thompson has led the way in how to respond to those who wound and hurt us, even in the midst of awful tragedy. Called to Forgive inspires greater understanding in how to forgive as Christ has forgiven us (Ephesians 4:32) and how to be released from the slavery of unforgiveness."

"In a world where there is so much negative rhetoric, hatred, and division, the words contained in this book will inspire you to forgive, heal, and grow. I am truly thankful for Anthony and his willingness to be open with his pain, struggles, and road to forgiveness. His testimony will change your life!"

"In June 2015 I experienced two most unthinkable acts. The first was the killing of nine devout church members at Bible study, based solely on their race by a hateful bigot. Then just two days later, devastated family members showing an extreme act of grace by telling the murderer they forgive him. This beautiful book encourages and challenges the reader to see the powerful and healing act of forgiveness in the face of hate."

"A powerful, compelling story of forgiveness. Rev. Thompson was prepared, ready for God's call. Through this amazing example of God's compassion and forgiveness, the citizens of Charleston will forever affirm that Love Is Stronger Than Hate. Thank you, Rev. Thompson--we love you!"

"Part memoir, part guidebook for the soul, Called to Forgive tells the deeper story of Rev. Anthony Thompson's decision to publicly forgive his wife's murderer. Full of empathy and deep wisdom, Thompson explains the complexities behind his decision to forgive and the power it exerts in his life. This is a story that can change the world."

Marjory Wentworth, coauthor, We Are Charleston: Tragedy and Triumph at Mother Emanuel

"Thompson makes an eloquent and intelligent case for Christian forgiveness, and his account of his pain, anger, and recovery as the spouse of one of the murdered brings emotional immediacy to the story. This riveting and optimistic account of coping with violent tragedy in a humane, honest way is highly worthwhile for any reader."