A Note Yet Unsung 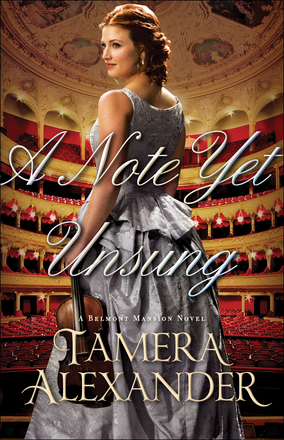 A master violinist trained in Vienna, Rebekah Carrington manages to wheedle her way into an audition with the maestro at the newly formed Nashville Philharmonic. But women are "far too fragile and frail" for the rigors of an orchestra, and Rebekah's hopes are swiftly dashed because the conductor--determined to leave his mark on the world of classical music--bows to public opinion. To make matters worse, Adelicia Acklen Cheatham, mistress of Belmont Mansion and Rebekah's new employer, agrees with him.

Nationally acclaimed conductor Nathaniel Tate Whitcomb is Nashville's new orchestra leader. And despite a reluctant muse--and a strange buzzing and recurring pain in his head--he must finish composing his symphony before the grand opening of the city's new opera hall. But far more pressing, he must finish it for the one who first inspired his love of music--his father, who is dying. As Tate's ailment worsens, he believes Rebekah can help him finish his symphony. But how do you win back a woman's trust when you've robbed her of her dream?

As music moves us to tears yet makes our hearts soar, A Note Yet Unsung captures the splendor of classical music at a time when women's hard-won strides in cultural issues changed not only world history--but the hearts of men.

Praise for the Belmont Mansion Novels

"... a novel rich in storytelling and history, peopled with living, breathing characters who made me laugh, and cry."--Francine Rivers, New York Times bestselling author of Redeeming Love

"Alexander is an inspirational fiction star. Her novels possess a lyricism that draws the reader in, and keeps them close. As Alexander brings her superb Southern Belmont Mansion series to an end, readers will remember Alexander's well-crafted, multi-dimensional characters, especially Rebekah and Tate, long after this tale is finished."

"Alexander tackles issues that have been long forgotten about and brings them back to life using historical figures and facts. The characters in this story are never boring and instead are more like treasured friends than fictional people. They are charming, caring and determined to leave their mark on the world."

"This final entry of Alexander's historical romantic trilogy will leave devotees on a high note."

"Christy Award-winner Alexander crafts a music-lover's delight in this third Belmont Mansion novel. . . . This fast-moving work of inspirational historical romance highlights both classical and Appalachian music. Thanks to Alexander's vivid writing, one can almost hear the music resonating off of the page."

"Alexander crafts a moving finale to the Belmont Mansion series. The clash of the main characters as they learn to work in harmony helps change the prevailing opinions of the era and reveals the beauty of love."