A Matter of Trust

by: Susan May Warren 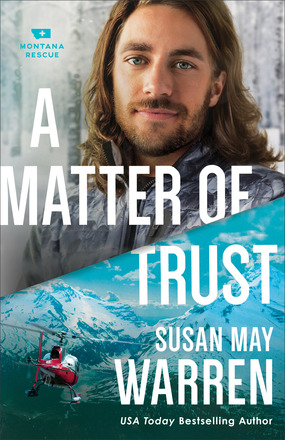 Champion backcountry snowboarder Gage Watson has left the limelight behind after the death of one of his fans. After being sued for negligence and stripped of his sponsorships, he's remade his life as a ski patrol in Montana's rugged mountains, as well as serving on the PEAK Rescue team. But he can't seem to find his footing--or forget the woman who betrayed him.

Senator and former attorney Ella Blair spends much of her time in the public eye as one of the youngest senators in the country. But she has a secret--one that cost Gage his career. More than anything, she wants to atone for her betrayal of him in the courtroom and find a way to help him put his career back on track.

When Ella's brother goes missing on one of Glacier National Park's most dangerous peaks, Gage and his team are called in for the rescue. But Gage isn't so sure he wants to help the woman who destroyed his life. More, when she insists on joining the search, he'll have to keep her safe while finding her reckless brother--a recipe for disaster when a snowstorm hits the mountain.


Praise for the Montana Rescue series

"Exciting rescues and an old mystery offer a thrilling, roller-coaster plotline and plenty of drama to keep the pages turning."--Bookpage on Wild Montana Skies

"A fast-moving, high-stakes romantic adventure set against the backdrop of Glacier National Park, which will leave longtime fans and new readers alike anticipating the next book in the series."--Publishers Weekly on Rescue Me

Susan May Warren is the USA Today, ECPA, and CBA bestselling author of over fifty novels with more than one million books sold, including Wild Montana Skies and Rescue Me. Winner of a RITA Award and multiple Christy and Carol Awards, as well as the HOLT and numerous Readers' Choice Awards, Susan has written contemporary and historical romances, romantic suspense, thrillers, romantic comedy, and novellas. She can be found online at www.susanmaywarren.com, on Facebook at Susan May Warren Fiction, and on Twitter @susanmaywarren.

"Exciting rescues and an old mystery offer a thrilling, roller-coaster plotline and plenty of drama to keep the pages turning."--Bookpage

"The redemption and resolution is what makes Warren's stories shine, and there's plenty of that offered in this novel."--RT Book Reviews


Praise for Rescue Me

"Warren has crafted a fast-moving, high-stakes romantic adventure set against the backdrop of Glacier National Park, which will leave longtime fans and new readers alike anticipating the next book in the series."--Publishers Weekly

"Rescue Me is the second book in the Montana Rescue series, and Susan May Warren has once again created characters that dig into your heart and latch on. Characters so real I missed them after the end."--Patricia Bradley, author of Silence in the Dark