A High View of Scripture? 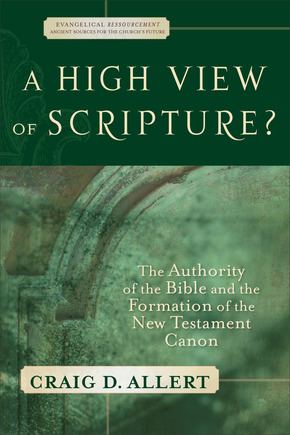 "An important, timely and readable book that offers a much-needed corrective and that should inspire a productive conversation, especially among evangelicals who are seeking to frame a theology of Scripture in which due attention is paid to the formation of the church's book."--Garwood P. Anderson, Review of Biblical Literature
For most evangelicals, a key tenet of belief is a "high view of Scripture," often defined as adherence to a verbal plenary inspiration view, along with the subsequent doctrine of inerrancy this view assumes. In this thought-provoking book, Craig Allert questions whether this view is in fact high enough. In particular, he avers that our view of the Bible has not been sufficiently informed by how the New Testament canon was formed in the early centuries of the church. While maintaining that Scripture is authoritative and inspired, he also believes that the tension between Scripture's nature as both a divine document and a human document has often been skewed too far toward the divine.

Seeking to remedy this imbalance, Allert examines various theories of the historical development of the New Testament canon. In addition, he explores how the early church fathers viewed Scripture, canon, inspiration, and authority, coming to the conclusion that while promoting a high view of Scripture, the patristic view does not necessarily line up with the modern conservative evangelical view. Finally, from these conclusions he proposes twenty-first-century implications for how we view Scripture.

A High View of Scripture? is the third volume in the Evangelical Ressourcement series.

About the Series: The Evangelical Ressourcement series is grounded in the belief that there is a wealth of theological, exegetical, and spiritual resources from the patristic era that is relevant for the Christian church today and into the future. Amid the current resurgence of interest in the early church, this series aims to help church thinkers and leaders reappropriate these ancient understandings of Christian belief and practice and apply them to ministry in the twenty-first century.

"There are two ways to regard this book: either as a foolhardy attempt to undermine the high evangelical regard for the inspired Scriptures or as a constructive plea for a more faithful evangelicalism that takes seriously the historical background of New Testament canon formation. Allert's passionate insistence on historical integrity and his disarming honesty and candor will render it necessary for us to engage in serious soul searching about our approach to Scripture. This book's convincing argument is also an opportunity for evangelicals to reassert the centrality of both church and tradition and to take both much more seriously than has often been the case. The vigor and erudition with which Allert locates the New Testament in the ecclesial context of the tradition puts evangelicalism firmly in his debt. The way we read this book will be a clear indication of the future of evangelicalism."--Hans Boersma, J. I. Packer Professor of Theology, Regent College; author of Violence, Hospitality, and the Cross

"Craig Allert asks how it is possible to have a 'high view' of Scripture if it is detached from the realities of the origin and formation of the Bible. He draws attention to the problems that evangelicals face when they lose the historical context of their theological affirmations, and he offers an important summary of the development of the Bible in early Christianity. Allert questions several cherished views widely held in the North American evangelical context. His volume has the potential of opening up a useful dialogue among evangelicals on the origin and nature of Scripture and its relation to contemporary theological issues. I commend this book to pastors, students, and biblical scholars who want a challenging discussion of these important issues."--Lee Martin McDonald, president and professor of New Testament, Acadia Divinity College

"Craig Allert has written an informed and coherent account of the issues involved in the formation of the canon. A High View of Scripture? is a timely and nuanced critique of the anachronistic approach to canon studies adopted by too many evangelical scholars. Allert's book is a valuable addition to the Evangelical Ressourcement series and will surely be a valuable aid in helping evangelicals understand and value ever more deeply the wonder and authority of the Holy Spirit, the Scripture, and the church itself."--Christopher A. Hall, associate editor, Ancient Christian Commentary on Scripture

"I have now read through Craig Allert, A High View of Scripture? and wish to commend it to you. . . . The major thrust--in fact, it dominates the book--of Allert's intelligent and important book is that one is hard-pressed to believe in the Bible without believing in the process the Church used to discern those books. In other words, the notion that we can believe in the Bible alone wrecks against the reality that Bible was never alone and is never alone. There is always a Church with it. To believe in the Bible is a tacit belief in the Church that discerned which books were in the 'canon.'"--Scot McKnight, jesuscreed.org

"[An] excellent little book. . . . A great primer on early Christianity and the formation of the canon. . . . The book can be read very profitably by those who are not haunted by idiosyncratically 'evangelical' questions. Allert sketches the dynamic interplay between Church and Word, and situates the formation of the canon within a catholic ecclesiology. . . . A great book that would be profitably read by Christian scholars across the disciplines."--James K. A. Smith, generousorthodoxy.net

"Evangelical theologians have spilled much ink describing and defending the authority of the Bible. Fewer Evangelicals, however, have given careful thought to how the various documents that make up the Bible finally came to be included. Craig Allert helps rectify this omission. . . . A High View of Scripture? is an excellent introduction to the formation of the New Testament canon. And Allert presents a worthy critique of those theologies that tend to cut the Bible off from the same Church that wrote, canonized and interpreted it."--Dustin Resch, Faith Today

"Allert's book on the formation of the NT canon will make uncomfortable, yet valuable reading for evangelicals. . . . Allert's balance between respect for scripture and a sensible explanation for the NT in our hands is an important effort."--Stan Mitchell, Religious Studies Review

"Allert's book argues successfully for taking into account the phenomenon of Scripture for developing a doctrine of Scripture and not relying on theological inferences about what Scripture should look like. . . . Worth reading."--Michael F. Bird, euangelizomai.blogspot.com

"This is a book that should be read by any who have a strong interest in issues pertaining to the nature of Scripture. . . . Allert has given us a highly accessible yet nuanced Evangelical case for why an understanding of the historical issues surrounding canon formation should be part of the Evangelical theological discussion. . . . His aim is a noble one, to bring Evangelicals into conversation with important issues that will not go away simply by turning a blind eye and deaf ear. . . . I hope that Evangelical theologians (not simply biblical scholars) will interact with the points Allert makes. At the end of the day, Allert is simply asking how we as Evangelicals can think about our Bibles in light of what we know about this one area of study, canon formation. . . . It is my hope that book[s] such as this, regardless of first reactions, will engender much needed conversations as Evangelicalism continues to explore new frontiers in self-definition."--Peter Enns, peterennsonline.com

"The author is to be commended for his fairness, his grasp of the contours of the discussion in the field of canon formation, and for the general clarity of his presentation. . . . [The volume's] primary impact will likely fulfill the author's desire to create a dialogue in the evangelical communities on the importance of the topic. . . . Allert's plea for his evangelical contemporaries to recognize the role of tradition, memory and ecclesiological debate in canon formation is a salutary one, and his presentation makes the case persuasively that these matters were decisive for the canonical process."--J. Andrew Dearman, Horizons in Biblical Theology

"Allert has offered the evangelical world an overdue and much-needed reflection on the nature of Scripture in light of the history of the New Testament canon. Although evangelicals have produced several serviceable histories of the formation of the New Testament, theological reflection on the character of Scripture in light of what is known of canon history is, perhaps not unsurprisingly, a question heretofore rarely given substantive attention in evangelical circles. For this reason alone, Allert's book deserves serious engagement, and in broad terms, I think he is pointing in the right direction by calling evangelicals to [a] view of Scripture that is more robustly ecclesial. He rightly and effectively dismantles special pleading apologetic accounts of canon formation, which, if not held by all evangelicals, are at least common enough to merit the rebuttal he offers. The book is well-tuned rhetorically for Allert's implied reader. He writes as an evangelical to evangelicals, admirably transparent to the ways in which his discoveries regarding the canon have propelled his own theological pilgrimage. The book is free of smugness and full of affirmations that should quell misappropriation of his arguments. It can be hoped that this book will start a productive conversation within evangelicalism on a topic too long ignored. . . . This is an important, timely and readable book that offers a much-needed corrective and that should inspire a productive conversation, especially among evangelicals who are seeking to frame a theology of Scripture in which due attention is paid to the formation of the church's book."--Garwood P. Anderson, Review of Biblical Literature

"This third volume in the Evangelical Ressourcement series is essential for a proper understanding of Scripture in any Christian context. . . . Allert's treatment of the relevant biblical and patristic texts is fascinating. His exposition is clear and his conclusions are drawn on the basis of evidence discussed. . . . This book is a good introduction to the issue of the formation of the canon and the issues contained therein, as well as being useful for those already familiar with the issues. Of particular interest to the exegete wishing to be reminded of the patristic sources involved is Allert's list of a number of sources which mention the Fathers' citation of non-canonical writings in a way which gives them similar authority."--Dom Anselm Brumwell, Downside Review

"Allert's book is a commendable and concise review of the issues of New Testament canon formation as they pertain to a certain kind of evangelical concern about scripture. . . . The bulk of the book is clear, well-argued, and full of good sense. . . . All credit to [Allert] for tackling head-on one of the fundamental confusions regarding evangelical doctrines of scripture. . . . On its own terms I would judge Allert's book as entirely successful. This is as helpful account of the nature of NT canon formation as one is likely to find anywhere, and draws with profit on John Barton's clarification of how so much canon debate today trades on confusions of terminology whereby like is compared with unlike. . . . One may commend a thoughtful, well-written, and well-produced volume in a series ('Evangelical Ressourcement') which bodes well for evangelical theological reflection on scripture and its role in the life of the church."--Richard S. Briggs, Heythrop Journal

"[Allert's] historical survey, which covers the majority of the book, is extremely clear and readable. It is a superb introduction to the issues of canonicity, accessible to a layperson yet deep enough to interest a theologian, and is well worth having in any library."--Michael E. Wittmer, Calvin Theological Journal

"Allert offers a clear and useful portrait of the history of the formation of the canon. He also makes a good case for considering carefully the way the canon emerged in the early church and the significance of this emergence for a proper understanding of the authority of Scripture."--Cornelis P. Venema, Mid-America Journal of Theology