A True Story of Death & Life 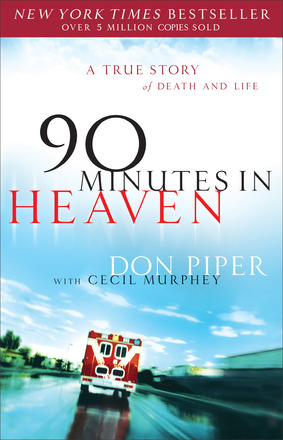 I died on January 18, 1989.
Immediately after I died, I went straight to heaven. While I was in heaven, a Baptist pastor came on the accident scene. Even though he knew I was dead, he rushed to my lifeless body and prayed for me. At least ninety minutes after the EMTs pronounced me dead, God answered that man's prayers. I returned to earth. This is my story.

"90 Minutes in Heaven is an extraordinary story."--Newsweek

"A friend handed me this book at about midnight, and come two or three in the morning, I was still reading, my heart pumping, bumps on my arms, the hairs on the back of my neck on end. It's a wonderful and inspiring story."--Donald Miller, bestselling author of Blue Like Jazz


Get a glimpse of heaven

On the way home from a conference, Don Piper's car was crushed by a semi that crossed into his lane. Medical personnel said he died instantly. While his body lay lifeless inside the ruins of his car, Piper experienced the glories of heaven. Ninety minutes after the wreck, while a minister prayed for him, Piper miraculously returned to life on earth with only the memory of inexpressible heavenly bliss. His faith in God was severely tested as he faced an uncertain and grueling recovery.

Now he shares his life-changing story with you, as well as true stories from readers about the effect 90 Minutes in Heaven has had on their lives.

Discover for yourself the book that everyone has been talking about--and watch your life change for the better.


Don Piper is a New York Times bestselling author and has been an ordained minister since 1985. He has appeared on Today, The 700 Club, James Robison's Life Today, and many other television and radio programs and teaches across the United States and around the world. He and his wife, Eva, live in Texas. Learn more at www.donpiperministries.com.

Cecil Murphey has written or cowritten more than one hundred books, including Gifted Hands: The Ben Carson Story. Cecil can be contacted at www.cecilmurphey.com.